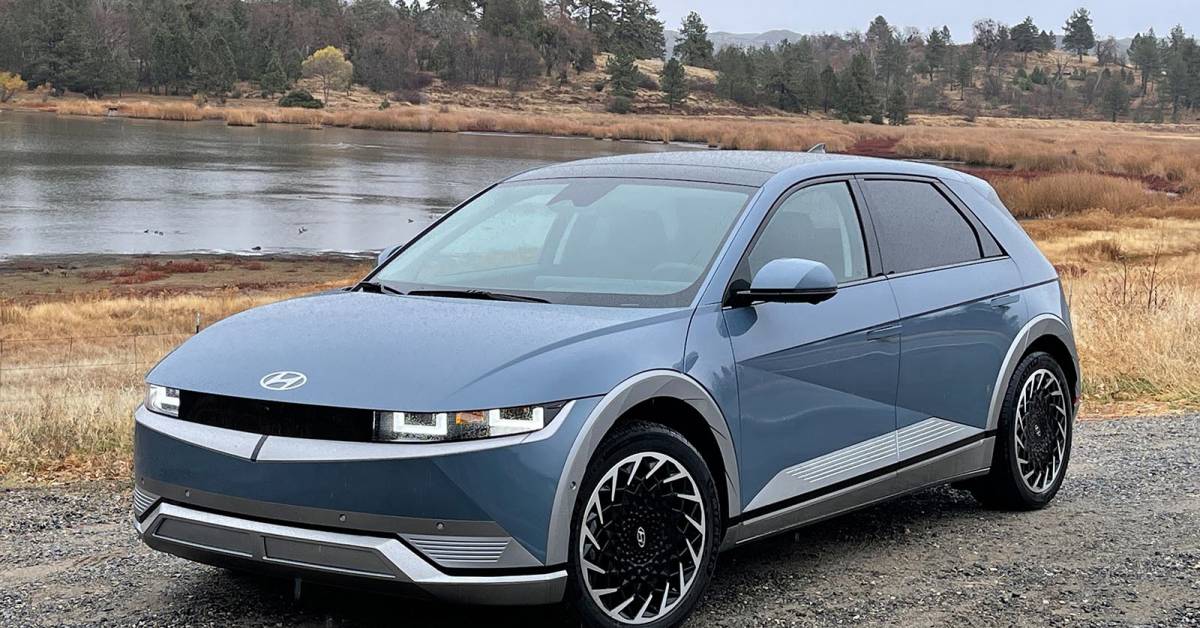 Hyundai’s battery-powered crossover takes aim at other promising players in the battery-electric market.

As we head into 2022, the auto industry is racing to electrify, with a flood of new battery-electric vehicles coming from some of the industry’s most familiar brands — as well as a handful of startups.

Hyundai was an early entrant with its little Kona EV. And it’s sharply upping its game as it rolls out the new Ioniq 5. It’s the first in what will become a new sub-brand of battery-electric vehicles.

The battery-powered crossover targets other promising new players like the Volkswagen ID.4 and the Nissan Ariya. It offers the sort of looks and features Hyundai hopes will attract buyers who haven’t considered a battery-electric vehicle. Those attributes include solid performance, good range, and reasonably rapid charging.

To get a feel for what the 2022 Hyundai Ioniq 5 has to offer, we headed down to San Diego to pick up the all-electric SUV. Then we headed up into the hills, with a requisite stop at the Julian Pie Company.

Hyundai has been telegraphing its plans for the new Ioniq family with a series of concept vehicles. The new Seven prototype unveiled at the recent Los Angeles Motor Show will become the Ioniq 7, for example. The same was true with the Ioniq 5. And during its transition from concept to production vehicle, there was surprisingly little lost in translation — except swapping the cameras for conventional side-view mirrors.

Whereas the Kona EV hewed closely to conventional vehicle design — primarily replacing the gas-powered model’s grille — the Ioniq 5 is clearly a battery-electric vehicle. No, it doesn’t go to radical extremes, but it adopts a new and distinct design language meant to take advantage of the underlying, skateboard-style platform it rides on.

That approach places the drivetrain, including the two optional battery packs, below the load floor. And it allows the wheels of the BEV to be pushed way out toward the corners. In fact, the Ioniq 5’s wheelbase is the longest in Hyundai’s U.S. fleet, about 4 inches longer than that of the three-row Palisade SUV.

If you’re familiar with the Hyundai brand, you might get déjà vu when checking out the Ioniq 5. The automaker’s designers made subtle references to the early Pony model. But it’s certainly not retro. The overall look falls somewhere between crossover and hatchback, with a relatively short nose and a sweeping roofline that flows into an integrated spoiler.

As with all new BEVs, aerodynamics heavily influence design in a bid to maximize range. And, like its competitors, the Ioniq 5 essentially eliminates a conventional grille, as there’s no need for air to flow under the clamshell-style hood. The vestigial grille that remains is framed by Hyundai’s distinctive Parametric Pixel lighting.

Like the new Hyundai Tucson, the Ioniq SUV adopts sharply creased door panels. From the rear, the battery car echoes the front-end design, with pixelated lighting and a somewhat V-shaped bumper. As long as the wheelbase is, the 5’s total length is much more compact — about the size of the conventional Hyundai Tucson. But slip inside and you’re in for a surprise.

The cabin is unexpectedly roomy, as the product development team was able to repurpose some of the space that would normally be devoted to the engine compartment. The spaciousness is enhanced by the lack of a transmission tunnel, which translates into a flat load floor. The rear cargo compartment is also much bigger than you’d expect.

Hyundai set out to create something of a “moveable living room,” according to Thomas Schemera, the Korean carmaker’s product chief. That’s underscored by the horizontal layout of the instrument panel, the “universal island” center console that can slide forward or back, and reclining front and rear seats.

Twin widescreen monitors cover much of the instrument panel. One replaces the traditional analog gauges, adding features that let you track the performance of the electric drivetrain. That includes a readout that tracks how much energy you consume — the EV equivalent of a fuel economy gauge.

The other screen not only serves as the Ioniq 5’s infotainment center but also replaces virtually all traditional knobs and switches. There’s a small panel with smartphone-style “buttons” to control key climate functions.

But one of our biggest complaints is the need to use the infotainment screen to operate both the seat and steering wheel heaters. It’s a multistep process that requires you to take your eyes off the road. And, let’s be honest, when your butt suddenly feels on fire, even a second’s delay is frustrating. An optional augmented-reality heads-up display system is on the checklist, as is Hyundai’s semi-autonomous driver-assistance system.

A rocker-style shifter replaces a conventional powertrain controller. As for the powertrain, Hyundai offers a variety of choices. Officially, buyers will have three trim levels to choose from, but that understates your choices.

You can get the entry-level Ioniq 5 SE with a standard-range 58kWh battery or an extended-range 77.4kWh alternative. And it can be ordered with a single 168-horsepower motor or a twin-motor all-wheel-drive option, with a maximum of 320 horsepower. The range for the various SE packages runs anywhere from 220 to 303 miles per charge. Prices start at $39,700.

We spent our time driving the top-trim Hyundai Ioniq 5 SEL. Again, buyers have powertrain alternatives, with either a single motor or the more powerful all-wheel-drive package. They start out at $50,600 and $54,500, respectively. But remember to factor in not only the $1,225 delivery fee but also the potential government incentives, including up to $7,500 in federal tax credits.

To put things into perspective, the base version of the Volkswagen ID.4 starts at $39,995 before factoring in fees and credits. The Chevrolet Bolt EUV has a base price of $33,000. And the Hyundai Kona EV has an entry model starting at $34,000 after a recent price cut. But the automaker hasn’t yet said what the upcoming replacement model will go for.

As for the similarly sized Tesla Model Y, there’s no longer a standard-range battery pack. The SUV is now only offered with a dual-motor drive and a minimum 318-mile range. The starting price is $60,190.

One of the obstacles to widespread EV adoption is the lack of a national charging infrastructure — something the Biden infrastructure bill aims to address. But the other issue is charging speed. While certainly not as quick as filling a gas tank, the Ioniq 5 can go from 10% to 80% in just 18 minutes, according to Hyundai.

The key is its 800V electrical architecture. It’s the only mainstream model currently using that system, something only a few luxury models have so far adopted. Of course, you’ll have to stay plugged in pretty much overnight if using a home Level 2 240V charger.

Another plus is that the Hyundai EV offers vehicle-to-load, or V2L, capabilities. In other words, you can use it to power up a campsite, keep your refrigerator running in a blackout, or even charge up another BEV.

If part of the driving experience for you is hearing the roar when you start ‘er up, you’re not likely to enjoy any BEV. You’ll know the Ioniq 5 is ready to roll when the two screens come to life and you’re greeted with a short series of welcome tones.

Leaving the Pendry Hotel in downtown San Diego on a blustery December morning, we headed out on local roads that soon merged onto the freeway. Several things were quickly apparent, notably the silence of the interior, even at 75 mph. True, there’s no powertrain noise, but some BEVs suffer from what I like to call the “stumps in the swamp syndrome.”

Without that engine note, there’s nothing to mask everything else, from wind and tire noise to the sound of things like the windshield wipers and climate-control fan. Hyundai has done an excellent job of isolating occupants in near silence, however.

The next thing you’re likely to recognize is the absolute smoothness of the powertrain, enhanced by the fact that Ioniq 5 — and most other BEVs — uses a single-speed transmission. So even with your foot on the floor, launching from zero to extra-legal freeway speeds brings none of the lurching most drivers would expect from a multi-gear transmission.

And compared to the similarly sized Tucson, the Ioniq 5 is quick off the line. Expect something in the 7-second range, with the single-motor package.

With the twin-motor option offering 320 horsepower and a full 446 pound-feet of torque, takeoff is much more spritely — around 5 seconds flat, zero to 60. What’s just as impressive is the way power comes on immediately, whether you’re launching off a stoplight or going for a high-speed pass. The Ioniq 5 also impressed us while working our way up the winding mountain roads to Julian, Calif.

We got a sense of its weight; battery packs are heavy. But mounting them below the load floor actually yields a low center of gravity and makes for some fun driving. It helps to have a responsive steering system and a suspension that sucks up all but the harshest bumps.

Hyundai is determined to become a leader in the emerging battery-car market. And it has a long list of vehicles set to follow the Ioniq 5 to market. A sporty sedan, the Ioniq 6, comes next, then the big Ioniq 7 SUV.

As the first entry into that new Ioniq brand, the Korean carmaker has reason to brag. The 2022 Hyundai Ioniq 5 is attractive, sporty, and fun to drive. It delivers unexpected amounts of passenger and cargo space and lots of features.

The range should be more than enough for most potential buyers, especially with the bigger battery pack. And the reasonably fast charging makes it possible to travel longer distances without too much disruption.

The bottom line is that this is a new SUV that could win over a lot of potential buyers. If you want a battery-electric alternative to the more familiar Hyundai Tucson, the Ioniq 5 is worth considering.