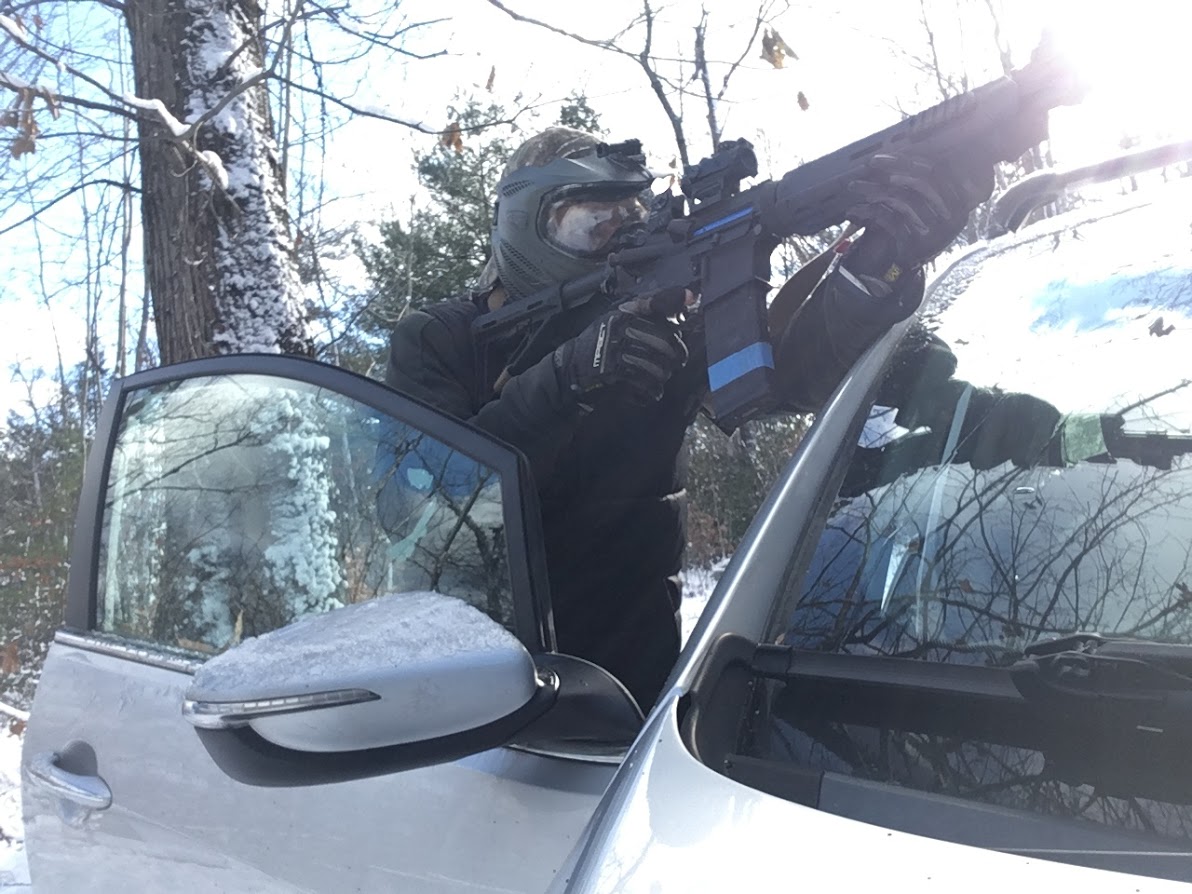 In this second article on how to gear up and run your own Force on Force (FoF) recreational or training activities, we’re going to talk about rifle platforms — the options out there, how they work, and what to expect before you purchase/use one.

We can generally divide FoF weapons into three categories:

Naturally, there’s a rifle option in each of these classes. Which is best? Ultimately, it’s a personal preference, but here’s some important considerations to keep in mind when selecting a training rifle:

You want to match your training load-out as closely as possible to your real-life load out so that the muscle memory and skills you build during FoF training will transfer over in case you ever need to defend yourself in real life.

With that in mind, let’s start by considering:

Paintball guns can be a lot more sophisticated than the recreational/sport models you might see at a paintball park with 500 round hoppers and no sights to speak of: 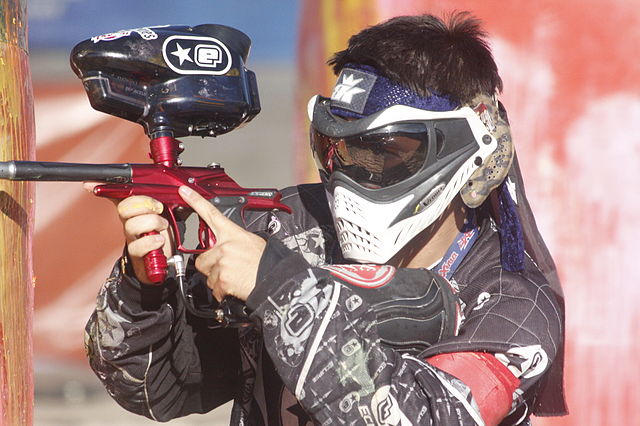 If all you can muster up is one of these field-grade paintball marker with no sights or features, don’t worry —  you can still gain valuable practice from these activities, if you adhere to the “Rules for Realism” outlined in Part 1. I like to think regular paintball guns are good practice for combat with a front-bead shotgun. Just limit your hopper capacity to something reasonable, like 10 rounds between reloads.

If you do have the option to purchase dedicated FoF gear, there are many new innovations with much closer fidelity to real battle rifles. Observe the paintball rifle below, in use during an Army FoF training event:

In addition to AR-style furniture, it appears to be equipped with Mil-Spec iron sights, and appears to be a dual-feed weapon (meaning it can be fed paintballs either from a detachable magazine or  typical paintball hopper).

When selecting a paintball rifle for FoF, you want to look for something that is magazine-fed, CO2 or Green Gas powered, and can support an optic or iron sights. An important question to ask is: where will the CO2 be stored? Will there be a bulky tank that will throw off the weapon weight and ergonomics (as pictured above)?

Another factor to consider when purchasing a paintball rifle is whether the gun is “First Strike” compatible. “First Strike” paintballs are an innovation that was introduced a few years ago: 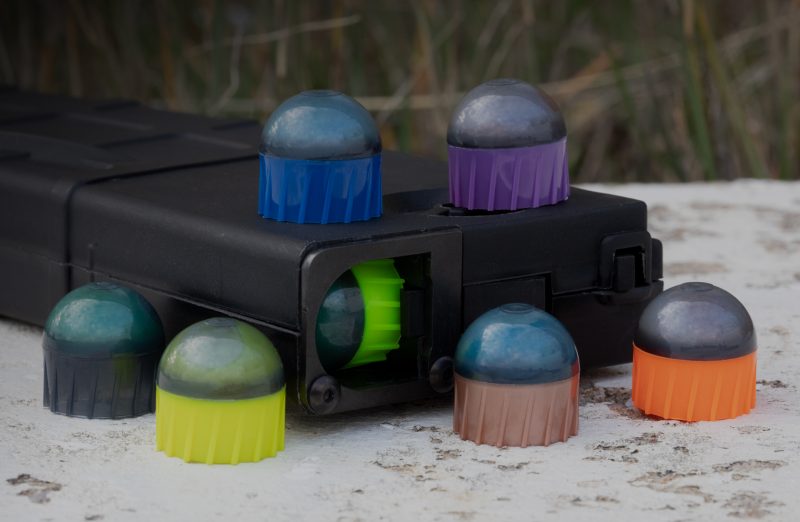 As you can see, the First Strike paintball combines a traditional ball with a plastic skirt — essentially converting it into a rifled Foster slug. Much like the rifled slug fired from a smooth-bore shotgun, the First Strike paintball rounds will self-spin, stabilizing themselves when fired from a smooth-bore paintball gun. They boast significantly higher accuracy than a traditional paint round, with all the lovely ballistics of a musket ball.

It’s important to note that First Strike paintballs can only be fed via magazine, and you’ll want to look for a “First Strike Compatible” label in the specs for your gun. Naturally, any attempt to feed these via a traditional paintball hopper will result in jams.

Unfortunately, at the time of writing, First Strike paintballs are only available in .68 caliber (the standard sporting paintball size). Believe it or not, there’s different caliber paintballs:  .43 caliber, .50 caliber, and — the most popular — .68 caliber.

One of the best paintball sim-rifles on the market (Unfortunately, it’s chambered in the less-common .43 caliber) is the Umarex T4E HK 416:

It’s a licensed reproduction of the Heckler & Koch HK416 and comes pre-painted in Force on Force electric blue. The attention to detail and compatibility with standard AR furniture and accessories is meticulously reproduced: 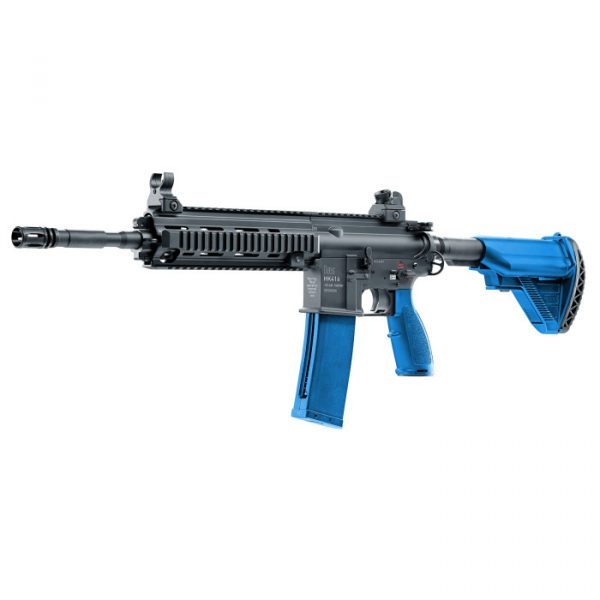 Here’s a run-down of its specs:

One thing I really like about the Umarex HK 416 is that the CO2 is contained inside the magazine. While this may not seem like a big deal, it is, for two reasons. First, it means you don’t need to worry about a bulky CO2 tank throwing off your ergonomics. Secondly, it means that you don’t need to change out a CO2 tank mid-battle when you run out of air. Just as in real life, when you’re out of ammo, load a new magazine — using the same motions as loading a new magazine in your real AR. This allows you to employ the real-life manual of arms, and matches the muscle memory you’re hoping to build for real situations.

The Umarex HK 416 costs $699.99 and magazines cost an additional $59.99 each. It’s a pricey option — about the same cost as a mid-tier AR build. However, once you’ve made the initial investment, paintballs and CO2 are a very affordable ammunition alternative.

There are many other paintball sim-rifles available, as a quick check on e-commerce sites will demonstrate. Just like selecting a real rifle, you’ll need to look around and find one that fits your specific preferences. But remember: you want something that: a) is mag-fed, b) can support optics/iron sights, and c) has a CO2 power management system that won’t throw you off with an awkwardly-placed bulky tank. The rest is up to you!

Airsoft has also come a long way since the original days of cheap plastic spring-loaded guns that needed to be cocked between each shot and fired at a measly 200 FPS. Just like with paintball, you can now find dedicated simulation airsoft rifles. All airsoft rifles shoot 6mm plastic bb’s — they cannot fire metal bb’s (which are .177 or .22 caliber).

There’s also a bit more flexibility with weapon type —  there are airsoft replicas of virtually every firearm ever made, such as this real-wood M1 Carbine from Evike.com:

Generally, however, the closer you stay to AR-pattern rifles, the more realistic and functional the airsoft gun will be. The most high-fidelity simulation variants are all AR’s.

The most popular airsoft rifles are either electrically powered (AEG) or CO2/Green Gas powered. I highly recommend staying away from electric rifles for Force on Force and sticking with gas-powered rifles. Having operated both, the electric guns have always felt less “real” to me, while the gas guns frequently feel like shooting a .22 rifle. This is partially because electric airsoft guns typically feature additional controls and ergonomics than real weapons, and therefore reduce the fidelity of the simulation. When you need to change the battery on your rifle in the middle of a scenario, it really breaks the “suspension of disbelief.”

An excellent selection of “milspec” airsoft rifles can be found on Max Velocity’s webstore, along with the magazines and gear needed. The airsoft guns he features are all gas powered, blow-back rifles, with bolts that lock back on an empty magazine. One popular model is the PTS Mega Arms MKM AR-15:

Here are this rifle’s specs:

This rifle also contains both the airsoft ammunition and the CO2 in each magazine, which is a huge selling point for me, as explained above.  The PTS Mega Arms AR-15 costs $440, the same price as a budget AR build. Individual magazines cost $49.95.

The great thing about airsoft is how cheap ammunition is, once you get past the initial investment of buying a high-quality rifle and a bunch of magazines. You can purchase 5000 airsoft rounds for $12 from Walmart. Tip: Get the 20 gram pellets — they fly much more accurately than the lighter 10 or 12 gram balls.

Buying a training conversion bolt for your rifle is a great option if you don’t want to spend the money acquiring a dedicated paintball/airsoft rifle — and then have to spend even more cash to outfit this practice weapon with red dots, sights, slings, and magazines. The great thing about using a conversion bolt is that you are training with the actual weapon you would use in a real-life situation, so everything from the weight of the rifle to the action of loading a fresh magazine has a one-to-one real world training value: 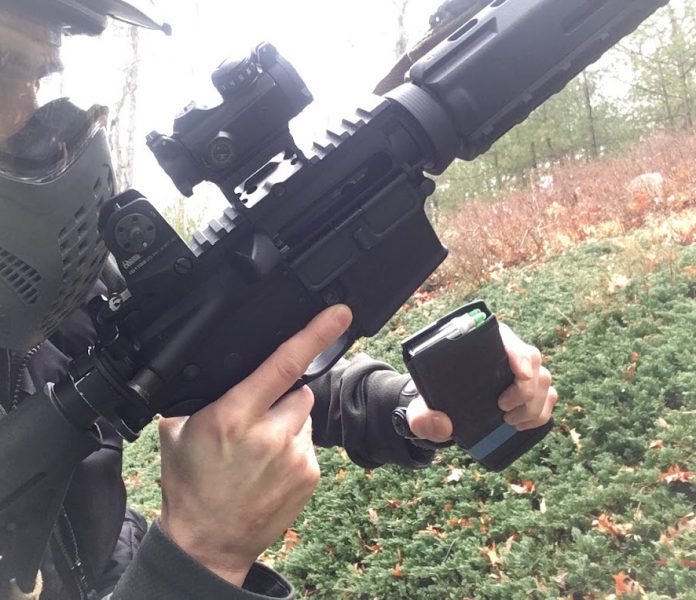 Simply drop the bolt into your rifle and you’re all set — you can now use your primary optic, setup, and even your regular 5.56/.223 magazines to train — all you need is training ammunition! 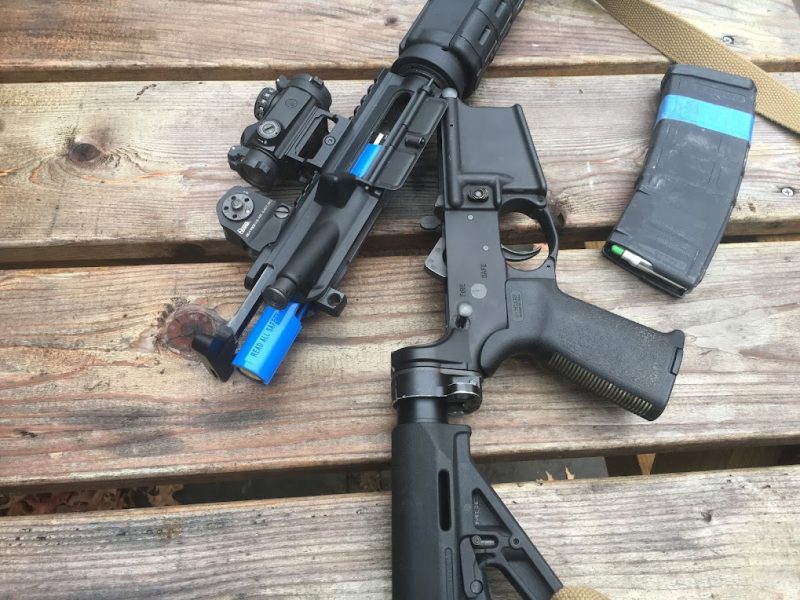 That last part is the sticking point, revealing, that like anything else, there’s a trade-off. While dropping a conversion bolt into your rifle is cheaper than buying and outfitting a second paintball/airsoft rifle, simulation ammunition is going to be much more expensive than airsoft pellets, paintball, and CO2 cartridges. Expect to pay as much for simulated ammunition as you would for real rifle ammunition — currently, the cheapest price for simulated rifle ammo is $19.99 for 20 rounds. The price was $14.99 pre-COVID, and the increase to near $20 happened when all primer costs skyrocketed mid-2020. 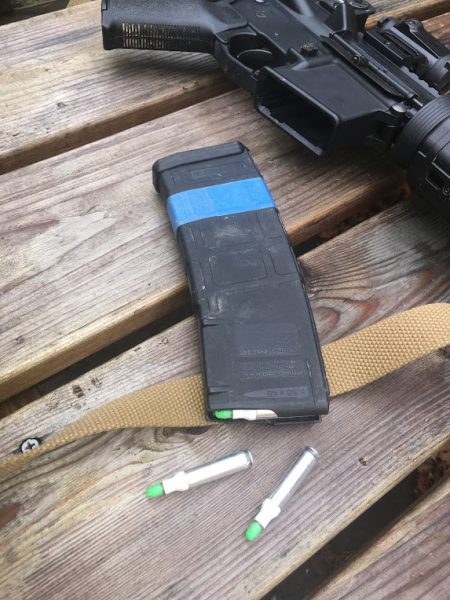 There are several brands that make AR conversion bolts and simulated 5.56 rounds. The best options for civilians are Ultimate Training Munitions (UTM), and the Force On Force  brand. They both work on basically the same principle — you get a blue conversion bolt that replaces your standard AR bolt. Then you get special primer-powered low velocity training rounds that cycle the bolt in a simple blow-back action between each shot while launching a .223 caliber plastic marking projectile.

The respective velocities differ somewhat — UTM fires at 375 FPS , and the Force on Force brand comes in at 450 FPS. 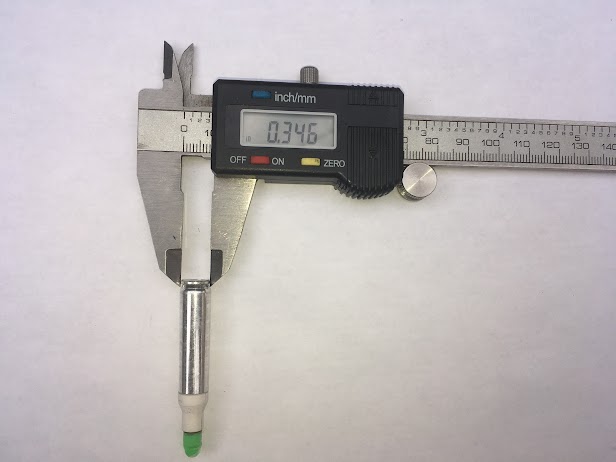 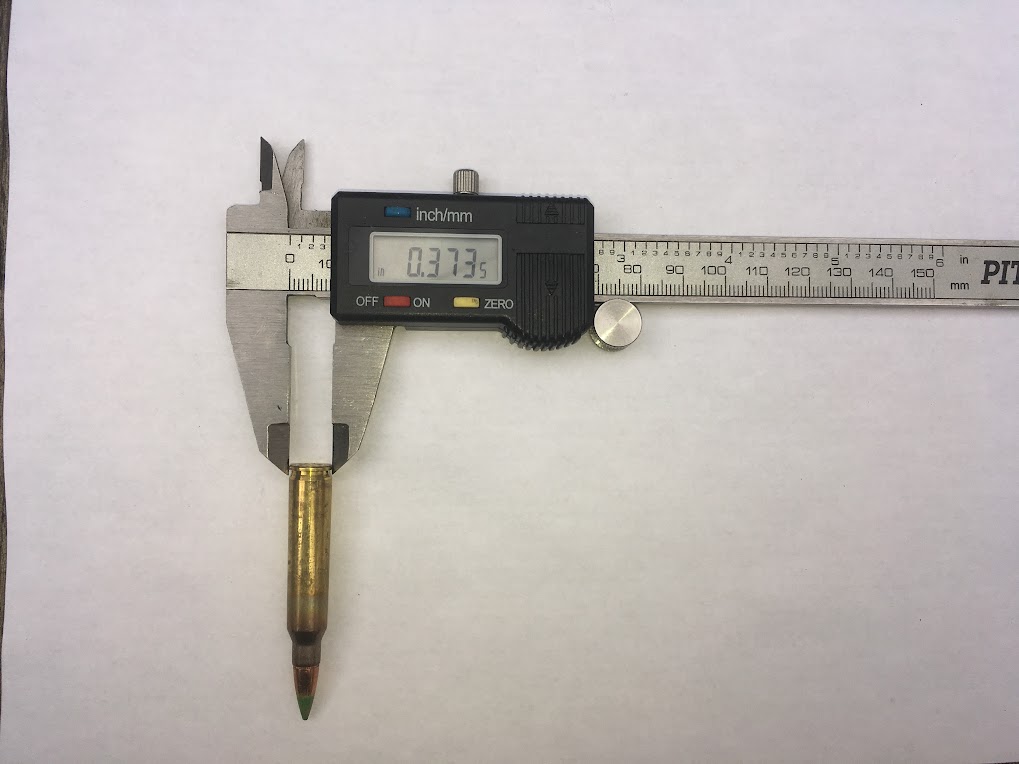 UTM utilizes an off-set firing pin that won’t contact the primer of a live round:

I personally prefer the Force on Force brand safety feature because I like that a real round won’t even chamber when the training bolt is installed.

It’s important to note that none of these safety features work if you forget to install the blue training conversion bolt. Since training with conversion bolts involve pointing and firing a modified real weapon at another person, it’s essential to follow the manufacturer’s safety rules when using these conversion kits, and follow our safety rules for Force on Force as outlined in Part 1 of this series.

Blue painter’s tape is a great way to mark Force on Force magazines and temporarily designate that a rifle is being used as a training weapon. It’s almost exactly the same color as “Force on Force electric blue” and won’t mar any finishes or leave sticky residue:

There’s another important safety feature to remember when using AR conversion kits. If you look at the back of the training bolt, there’s a “check bore” warning. This means that after you use your AR conversion bolt for training, you MUST visually inspect the bore before re-installing your standard AR bolt and firing live ammunition. This is because sometimes (rarely) the low velocity paint rounds will stick in the barrel, causing an obstruction. If a live round was fired while a training round was stuck in the barrel, catastrophic damage, injury, or death could occur. Therefore, always check the bore when removing the training conversion bolt and installing the real AR bolt. 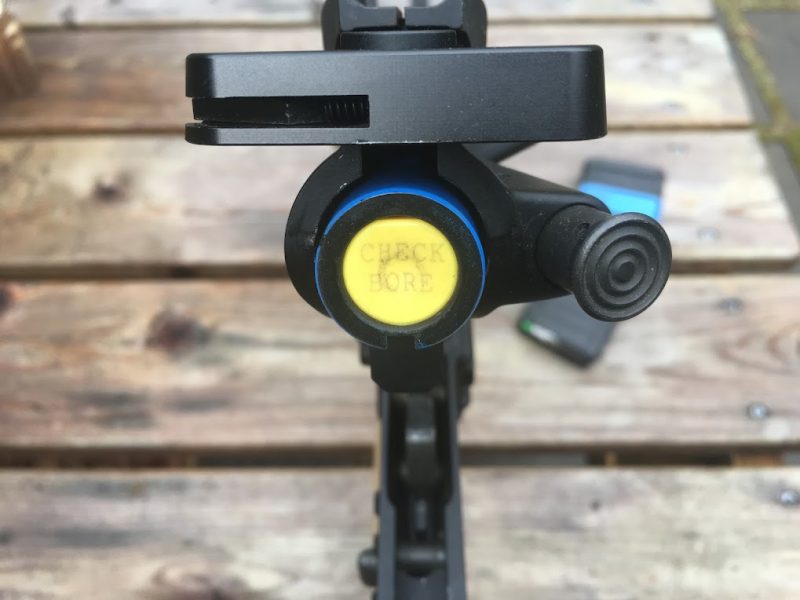 As a final note on conversion bolts, expect a slightly different point of impact/point of aim when using your dedicated AR optic with the training bolt/training ammunition. You can either adjust your red dot during training, or hold over slightly to compensate for the lower velocity/muzzle drop natural for the training rounds. Within a 30 yard engagement zone, you shouldn’t notice a significant disparity when aiming at man-sized targets. 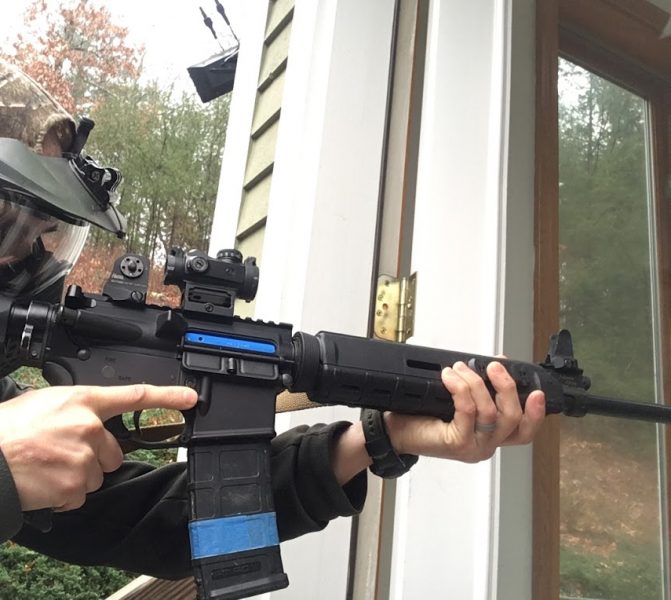 In the next part of this series, we’ll discuss pistol options for Force on Force training. Meanwhile, if you’re still not sure whether you should get a paintball rifle, airsoft rifle, or conversion/training bolt, here’s a Pro’s/Con’s list to help you decide! 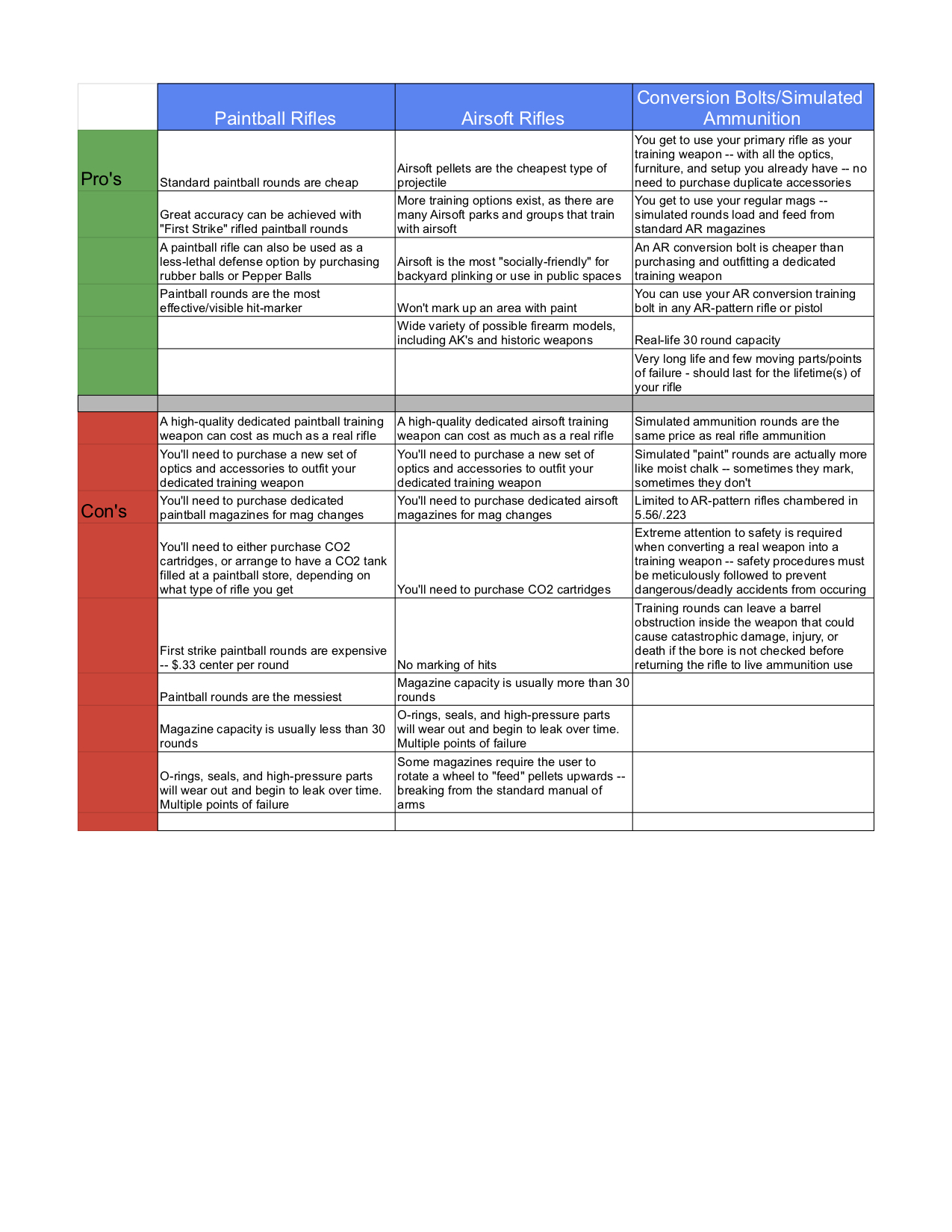