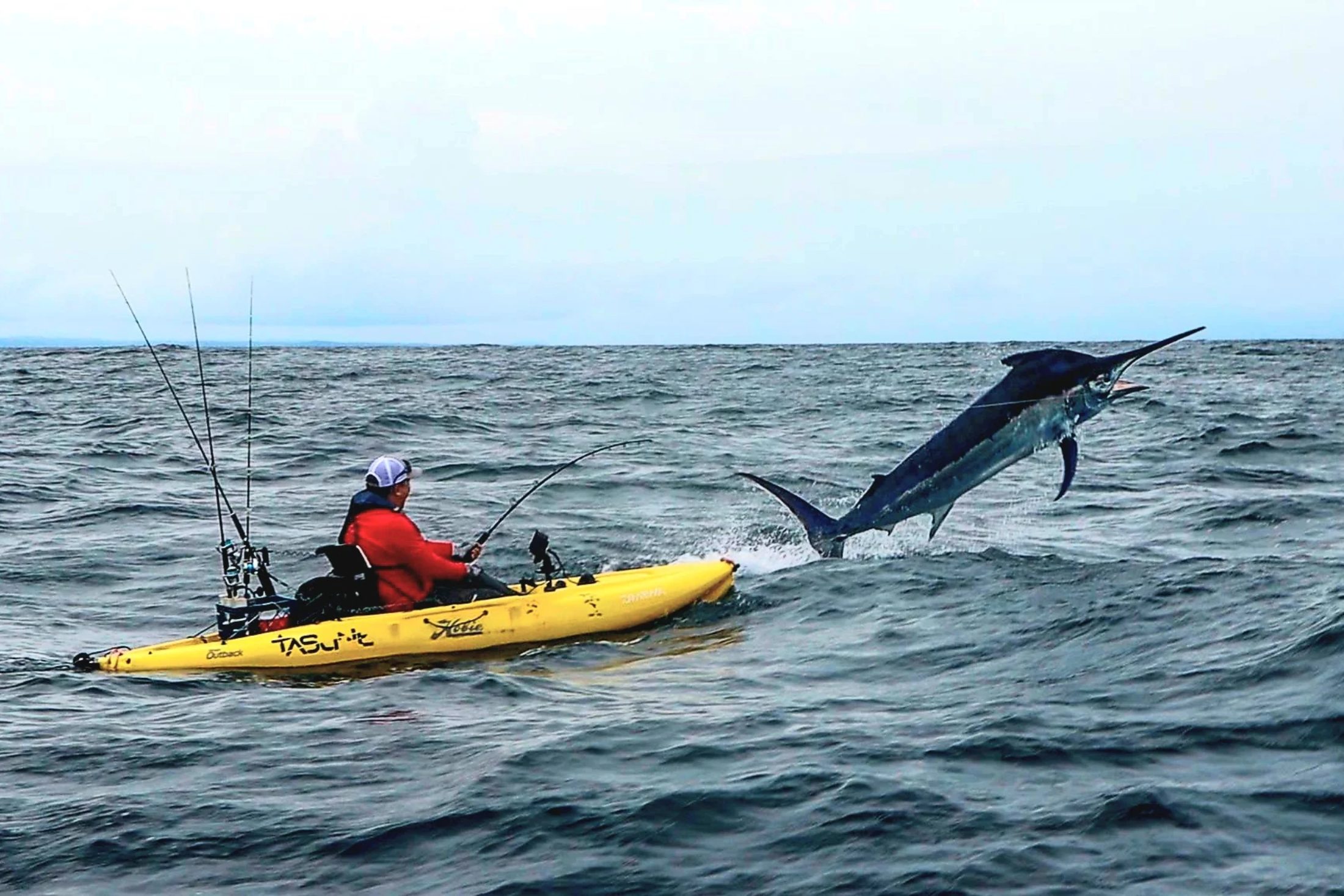 From the inspiring to the tragic, this is GearJunkie’s wrap on exploration and adventure news of the week. Here’s what you missed and a few things to look forward to.

A Florida angler by the name of Scott Mutchler landed a 600-pound whopper of a marlin last week. Mutchler was fishing in his 13-foot Hobie Outback kayak off the coast of Panama when he snagged the beast.

“My first thought when he breached was just the sheer enormity of the size of the fish,” Mutchler told Field & Stream. “And the next thought was how incredibly beautiful and majestic they are. They’re gold, blue, black, and silver and they have these gigantic eyes and a really big bill. Seeing it up close and in person was breathtaking.”

Not only did the Jupiter, Fla., man harness the catch of a lifetime, but a fellow angler also managed to capture the battle on film. Check it out below.

Andrea Sanson of Golden, Colo., just set the women’s record and second 24-hour all-time record atop the grueling Manitou Incline. Over the course of a day, Sanson coursed up and down the incline 19 times — five times the number of laps accomplished by the previous women’s record holder and barely second to that of the men’s record of 22 laps in 24 hours set in 2014.

In full, “the sufferfest amounted to about 34 miles and 38,000-plus feet of straight-up elevation gain in one relentless push through daylight and darkness,” reported The Gazette.

There’s something special about Colorado’s Manitou Incline. With 2,000 feet of elevation gain in less than a mile, it’s a brutal but beautiful hike with a cult following. Read more…

American alpinists Graham Zimmerman, Dave Allfrey, and Whit Magro bagged an epic first ascent in the Alaska Range late last week. Their new route, dubbed “The Pace of Comfort” (VI 5.10 A3+ M6, 70-degree snow), resides on the remote Kichatna Spire and spans some 3,100-plus feet. According to ExplorersWeb, the spire “punches 1,885m high by prominence — mostly in vertical granite — from the Cul-de-Sac Glacier.”

“The Pace of Comfort” is only the second established line on Kichatna’s northwest face. Its neighboring route, “The Ship’s Prow,” was put up by the legendary Jim Bridwell and Andrew Embick way back in 1979.

The race started with teams needing to plot the first seven checkpoints of a foot orienteering section that led to a 170-foot cliff rappel from the San Damiano bluff. After a paddle on the Ohio River and up the Big Grand Pierre Creek, teams transitioned back to foot for a 3-mile trek with a CP located in a hilltop cave! A 30-mile bike, a big overnight O-course, and a 10-mile bike race to the finish line completed the wilderness adventure.

The annual Escape from Alcatraz Triathlon went off this past weekend, too. The iconic event, located in San Francisco, featured a 15-mile swim from Alcatraz Island to the San Francisco shoreline, followed by a hilly 18-mile bike ride to Golden Gate Park and an 8-mile trail run to Baker Beach via the famed Sand Ladder.

Head here to catch the results.

Vermont’s Killington Resort hosted its latest skiing/closing day since 1996 over the weekend. June 4-5 sets a 25-year record — the resort hasn’t stayed open this late since the 1996 season. Killington ran its quad lift for skiers at $79 for the closing day, with 50% of the weekend’s proceeds being donated to Pride Center VT.

At almost 100 years old, Utah native Junior Bounous has skied more lines in a single season than most of us could ever dream of. Read more…

This article is sponsored by Toyota. Find out more about the 2022 Toyota Tundra here.

Put The Wild In Your Wildlife Photos
Your Best Photo Of 2022 Winner Robert Henderson
Stay Warm with the 5.11 Tactical Thermees Insulator Jacket
How to Make a Bug Out Bag That’s Right For Your Needs
French Police Turn To Speer Ammunition With Duty Ammo Contract