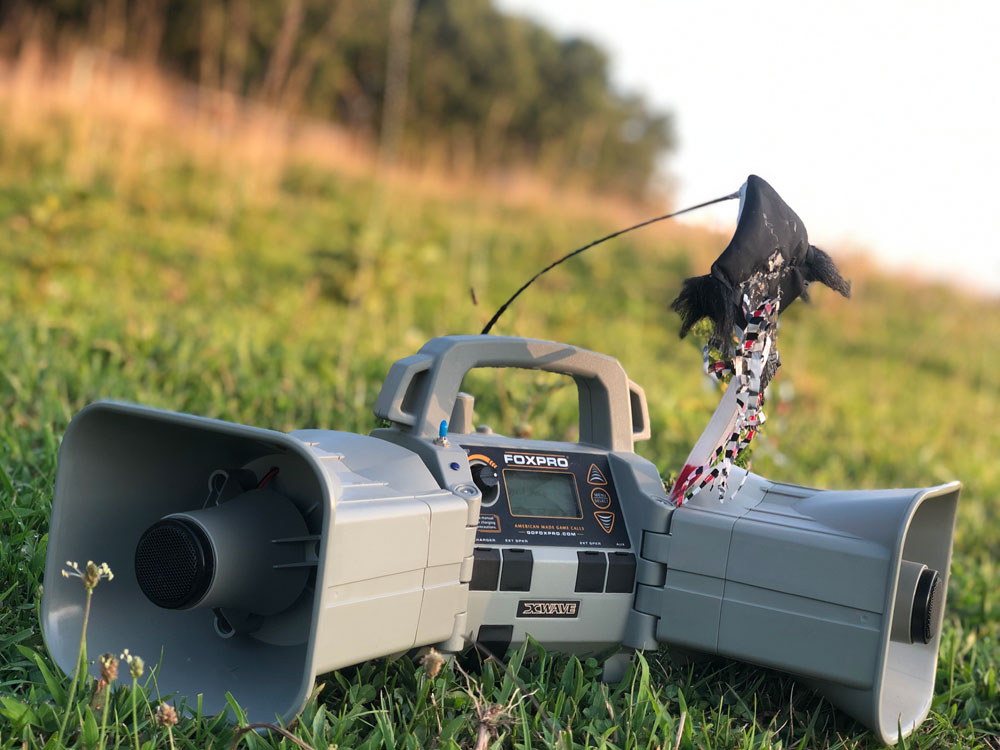 Calling for predators is a fine art that many hunters spend years perfecting and refining. However, newer hunters and land owners often don’t have the time to perfect their calls and with an increase in invasive predatory species across the country many out there are just looking for an effective way to attract said predators so that they may be culled to preserve the land they are invading or pestering. e-calls have been on the market for years now but many are turned off by them as the first few offerings to the market weren’t exactly up to even the most basic of human-produced calls and you were probably better off just sitting and waiting for predators to show up in your area rather than scaring them off with some off-brand calls. However, new calls have proven to be quite effective and have provided land owners and hunters with a new electronic tool that helps them on their hunt. Today we’ll be going over the best electronic predator calls you can pick up for hunting coyotes, foxes, and wolves.

The Primos Alpha Dogg electronic predator call leads the pack right to you with rotating directional speakers for 180-degree coverage or crisp concentrated directional calling. The ergonomic remote has a full-color display and a simple-to-use layout. This call is equipped with 64 distinct calls-_and you can add and remove your own calls as well.

Take the guesswork out of predator calling. The Alpha Dogg doesn’t give you just individual sounds to choose from, it has 6 complete expert hunt sequences and 75 different sounds. These are proven hunt sets that get dogs in. The caller is powered by dual 25-watt, distortion-free speakers, allowing for crisp, clear, and loud calls. The easy-to-use remote can be operated quickly with one hand and has a range of 200 yards. The remote sound list is displayed on easy to read 2.5-inch high-resolution TFT screen and sounds are organized by species such as coyote, fox, bobcat, deer, elk, etc.

Cons/Remote is a bit finnicky

The ICOtec® Gen2 GC500 Electric Game Call offers outstanding remote technology with a 300-yard range, with no line-of-sight required between the remote and the speaker unit. The GC500 game call comes with 200 pre-recorded sounds. The remote features a large screen font, a backlit button on/off switch, decoy activation button and a pause-call button. Programmability is made easy with the Gen2 GC500, as calls can be loaded and played directly from a standard size SD card. Any custom audio file saved as a .mp3 or a .wav (16 bit or less) file format can be played in this electric game call. ICOtec has an exclusive FREE audio call library that is accessible from their website. The ICOtec Gen2 GC500 Electric Game Call is a lightweight, compact unit that easy to carry and quick to set up. Speaker unit runs on 4 AA batteries and the remote runs on one 9V battery (batteries not included). The unit has a external speaker port and a decoy port, and includes a remote sync cable and computer USB connection cable.

Pros/Lots of customization and variety with 200 on-board calls

This is arguably the ultimate coyote call. A bit older than some of the newer options on the market but still providing the user with accurate and effective predator calls, the Shockwave is consistently effective according to many predator hunters. The Shockwave has unparalleled sound quality due to its high quality speakers and can be heard by humans up to 100-yards away and by predators at even greater distances.

Pros/Brings all the coyotes to the yard

This is a great budget option for two reasons. The Johnny Stewart Grim Speaker is a classic and has been proven to be effective in years past even in the early days of electronic predator calls. The little unit has a surprisingly loud sound output and comes along with an intuitive and easy-to-use remote that displays each call on screen from a shortlist and also include information such as remaining battery power. The unit is also powered by standard batteries and this can be great for those that like to hunt off-grid and don’t have an easy solution for charging their e-calls.

This one adds a bit of flair to the sound mixing with its remote-controlled rotational base system that not only displays an attractive furry motorized decoy tail but also rotates in 360 degrees to call predators from all directions instead of just one. The Lucky Duck Revolt is known for having one of the loudest onboard speakers on the market and comes with 100 pre-recorded calls with much more room to spare for your own collection.

Bottom Line/A great predator call if you can afford it

How long does it take for Coyotes to come around when using a call?

Coyotes are very intelligent animals and thus they can demonstrate a great amount of caution when they’re being called. Most of the time Coyotes can start coming around in as little as 15-20 minutes but a far more reasonable time for coyotes to start coming in is around 30-minutes or more. Coyotes don’t move at the speed of light but they have great hearing and will more often than not, come when they hear a call.

What are the regulations for hunting Coyotes?

While there are some exceptions, Coyotes have largely become a pest species in most of the country. Barring any safety issues, most states have allowed hunters to freely take Coyotes year-round without any bag limits Coyotes have become such a problem that a lot of states have also allowed for night hunting as long as the proper equipment is used. The regulations vary from state to state but you’ll largely find that you can hunt coyotes in almost any place they have a sizeable population.  Long story short, Coyotes don’t have any special protection in most of the country and thus can be hunted without a tag or even a permit in many cases.

Wolf hunting sounds interesting. How much more complicated is it than coyote hunting?

In stark contrast to coyote hunting, wolf hunting isn’t nearly as permissible or simple. First off, wolf hunting is often more complex and expensive even in areas where wolves have sizeable populations that are affecting local wildlife. In these cases, many game wardens will authorize an official cull that temporarily suspends bag limits but for the most part, hunters will have to apply for a hunting tag and also be properly permitted to hunt wolves.

Wolves are also markedly much more intelligent than coyotes and are great at sniffing out false calls put on by hunters. However, any successful hunt should use multiple lures, and it’s best to play on Wolf’s predatory nature by providing it with calls and scents that are not part of its home range as this will trigger its territorial nature.