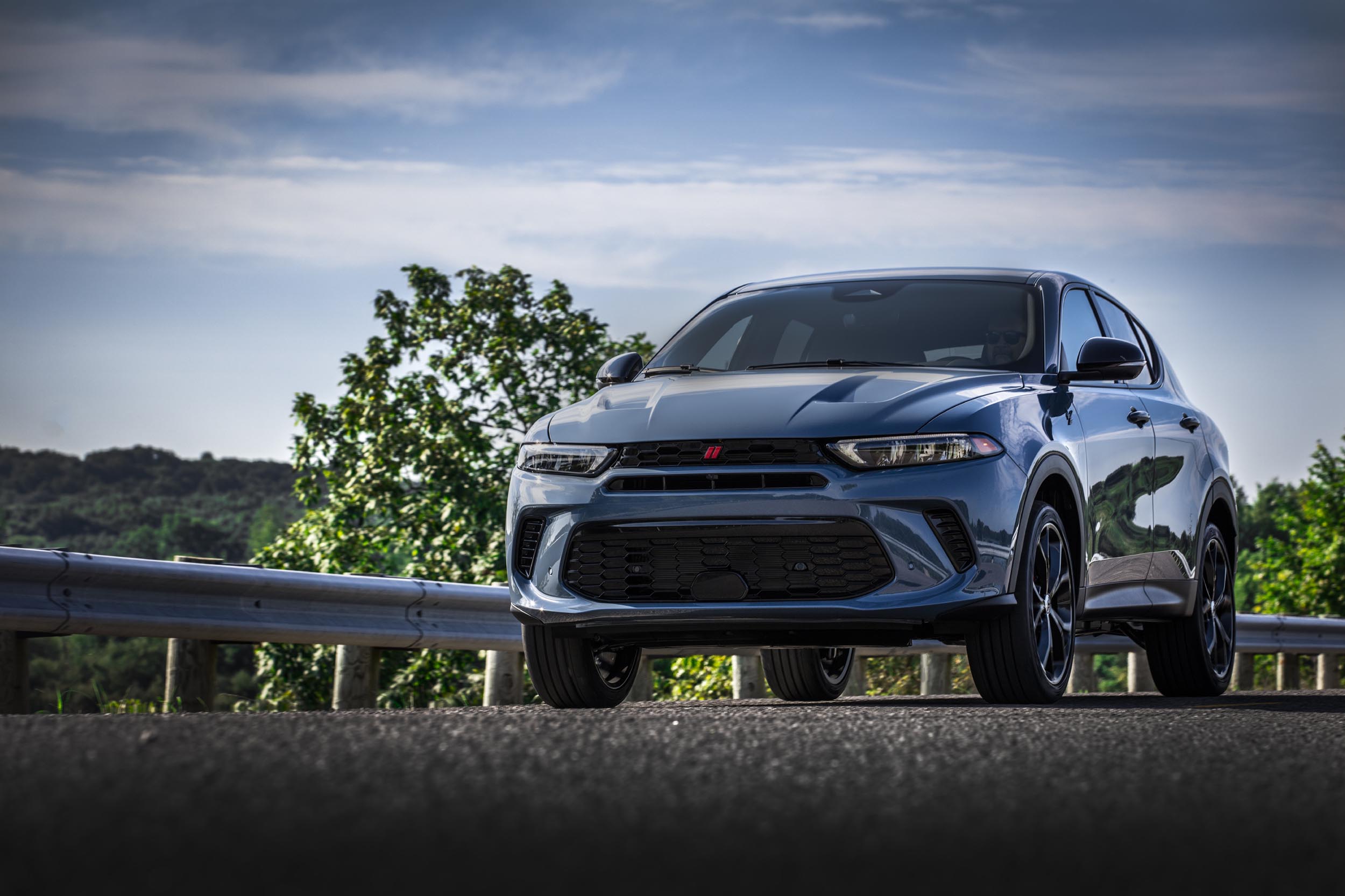 Even though Dodge is best known for muscle cars like the Challenger and Charger, today’s new vehicle buyers want SUVs.

The Hornet delivers quite a sting, especially with the top-line R/T model that’s set to become the performance brand’s first plug-in hybrid. It introduces the new PowerShot mode that cuts a full second off the PHEV’s 0-60 times — yet still delivers up to 30 miles in all-electric mode. But buyers on a budget can still post some impressive launch numbers with the base 2023 Dodge Hornet GT starting at under $30,000.

The plan is “to go in and disrupt the (compact crossover) segment,” said Dodge brand boss Tim Kuniskis during a media backgrounder.

The 2023 Hornet is based on the same platform as the little Alfa Romeo Tonale, and there’s no question the two products have a lot in common, especially when viewed in profile. Rather than “spending a few million,” Dodge decided not to redesign the high-waisted doors of the compact model. But it does get a number of unique details both up front and at the back end, and the Hornet measures a wee bit longer overall than its Italian sibling.

Integrated heat extractors in the hood are meant to enhance its muscular looks, while a “mail slot” opening is sculpted into the front fascia. A menacing grille gives Hornet what Dodge refers to as an “all-business demeanor.”

Around back, the R/T packages get new painted lower cladding and distinctive integrated dual exhaust ports. The taillamps stretch the width of the vehicle, with a Dodge Rhombi logo in the center — brightly lit on the electrified R/T model.

A new badge helps celebrate the return of the Hornet nameplate. It first appeared on the classic Hudson Hornet back in the 1940s, and Dodge used the name on a popular 2006 concept vehicle.

The goal was to create “a dynamic muscle crossover,” said exterior design chief Scott Krugger, “not a boring utility vehicle.”

That holds true with the Hornet’s decidedly driver-focused cabin, which picks up some key styling cues from the bigger Dodge Durango. Red stitching and a dark headliner, along with a flat-bottomed steering wheel, add to the performance feel of both models.

The instrument panel is dominated by twin LCD displays, a 12.3-inch gauge cluster, and a 10.25-inch infotainment touchscreen. Hornet offers an array of Digital Brand’s technologies, including the latest Uconnect 5 infotainment system, and wireless versions of Apple CarPlay and Android Auto. The vehicle also has an integrated Amazon Alexa voice assistant.

There’s also that plug-in hybrid drivetrain shared with Alfa’s Tonale. Dodge bills it as the brand’s “first-ever electrified performance vehicle,” and the focus is, indeed, on power.

The drivetrain pairs a 1.3L turbo-four gas engine paired with a 90kW electric motor. The combination punches out “285-plus” horsepower — final numbers still being worked out — and 383 pound-feet of torque.

That’s until you press the PowerShot button, which kicks in an extra 25 horsepower and gobs of instant torque. That cuts 0-60 launch times down by a full second, to 6.1 seconds.

According to Kuniskis, the PowerShot function will be offered on all future electrified Dodge models, including the all-electric muscle car the brand plans to launch in 2024.

Meanwhile, the R/T’s 15.5kWH lithium-ion battery can deliver enough power to drive up to 30 miles in all-electric mode. Using the built-in Level 2 charger, the new Dodge plug-in can be fully recharged in as little as 2.5 hours.

The top-line model’s hybrid drive system is paired with a six-speed automatic gearbox sending power to all four wheels.

Like the R/T, Dodge engineers are still working out final specs on the 2023 Hornet GT, but promise it will produce at least 265 horsepower and 295 horsepower from a 2.0L inline-four with a twin-scroll turbocharger. It’s currently rated at a 6.5 second 0-60 time.

The Hornet GT also features AWD, though Dodge isn’t yet releasing transmission details. In Europe, the engine is paired with a seven-speed manual. No manual transmissions will be available for either Hornet model.

Final fuel economy numbers have not yet been released for either version of the Hornet.

Both the Hornet R/T and GT models will be available with a Track Pack package adding 20-inch Abyss wheels and other styling and performance features. Dodge plans to have dozens of additional performance accessories available through its Direct Connection service.

With the launch of Hornet, Dodge is reviving another old name, GLH. That name has been used several times, though it’s best known as the high-performance package for the Dodge Omni GLH — and the limited-edition 1986 Shelby Omni GLH-S. Short for “Goes Like Hell,” only 500 were made.

A show car version was unveiled during the debut of the new SUV. According to Dodge, it boasts twice the power-to-weight ratio of the Shelby classic. For now, it’s just a concept meant to show what Hornet customers will be able to do with the new crossover.

In concept form, the GLH features:

Dodge officials are hinting that a production Hornet GLH could follow. But GT buyers will be able to put one together on their own using Direct Connection parts.

The Hornet will be built alongside the Alfa Romeo Tonale at a plant in Naples, Italy. Buyers will be able to start placing orders for the GT model on August 17, 2022, with the first cars arriving in U.S. showrooms late this year. Dodge hasn’t announced when it will begin taking orders for the Hornet R/T but expects it to reach dealerships by the spring of 2023.