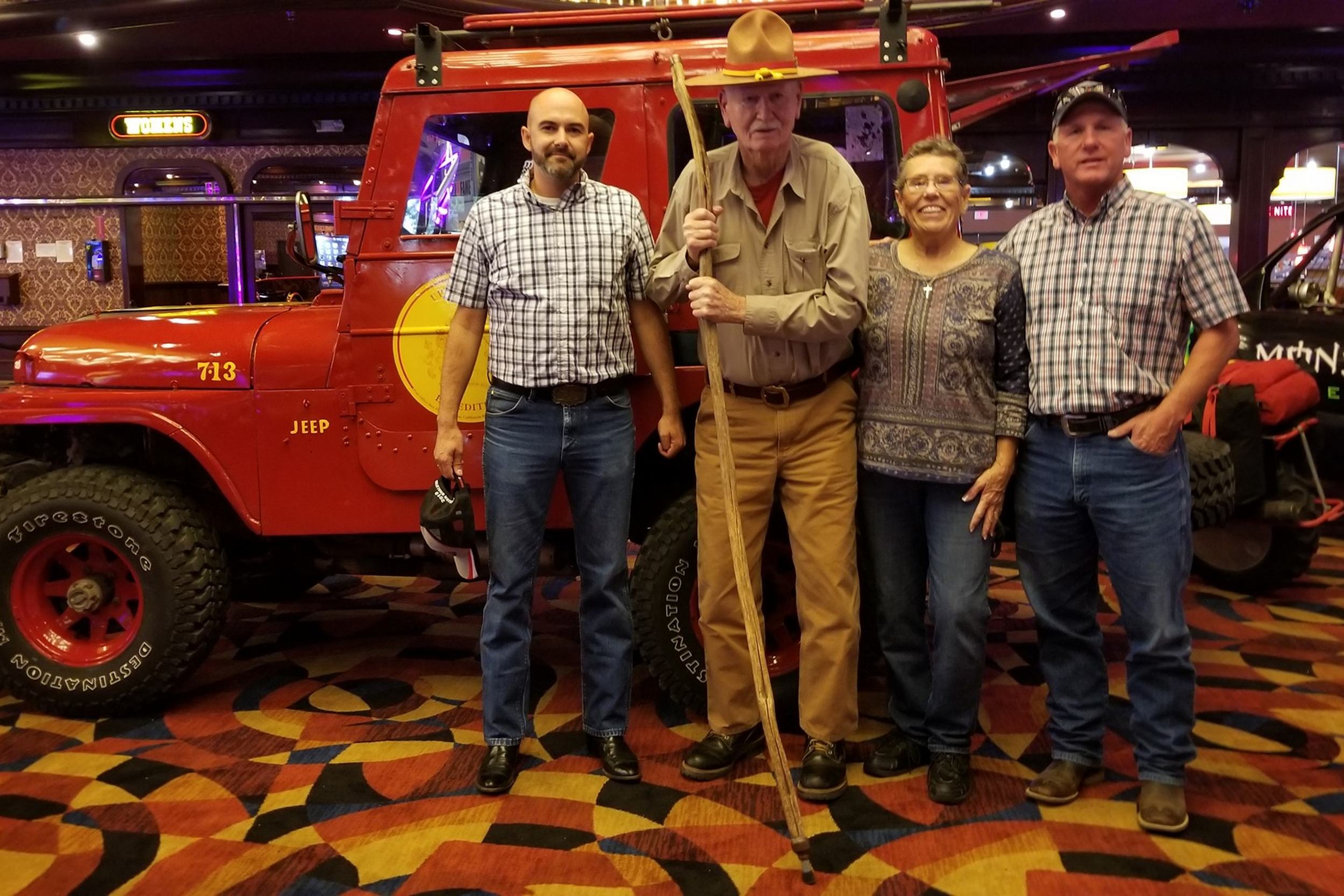 The first to drive cross the Darién Gap by land, Loren Upton was a rare example of an adventurer. This is the story of his life’s goal — a drive around the world from north to south and back up again.

An overlanding and adventure driving legend has died. Loren Upton was in the first team to cross the Darién Gap by land and drove around the world on a north-south course, part of a journey that would take more than 40 years to complete. Upton is survived by his wife, son, granddaughter, and great-granddaughter. He was 87.

Born in Southern California in 1935, Upton joined the Marine Corps in 1952 and served for 4 years. Following an honorable discharge, Upton began a career in bridge and highway construction — experiences that provided the challenge he needed in his life and that helped build the skills needed to head to some of the most inhospitable terrain in the world. And then, drive across it.

The Goal: Be First to Circumnavigate by Land in an American Vehicle

Like many of us, Loren was fascinated by tales of the world’s great explorers: their goals, their journeys, and their stories.

To put his own mark on the world, Upton set a life goal of becoming the first person to circumnavigate the globe in an American-made vehicle.

If that wasn’t enough of a challenge, Upton’s plan meant doing it from north to south. That’s tip to tip of North and South America, followed by the bottom of South Africa to Norway. That’s a massively longer route than the east-west drive around the globe. Forget around the world in 80 days, just one single mile of this trip took almost 30 years.

It would take Upton multiple attempts to pull off the route. The first started in June of 1975, when he left his home in Death Valley driving a 1972 Ford F-250 and headed north to the Atlantic Ocean, intending to follow the Pan-American highway south. The Darién Gap would stop this first adventure attempt.

The Gap That Would Be Nearly Impassable

The Darién Gap is one of the most inhospitable environments on the planet. The 125-mile stretch separates Panama from Colombia and is covered with thick jungle, rugged mountains, and a vast swamp. To this day, no roads cross The Gap. Anyone else trying to pass takes a boat around instead.

The first attempt ended when a member of the team was shot and killed in The Gap while Upton was away from the group.

In 1977, Upton set off again behind the wheel of a CJ-7 Jeep. With this smaller vehicle, he was able to cross The Gap in 49 days, though floating the Jeep on dug-out canoes for a short section meant he didn’t consider it an all-land crossing.

The second attempt ended when “the road made a sharp turn, he didn’t,” says Upton’s site Outback of Beyond.

The third attempt around the world was in 1979 with a CJ-5. This one ended in The Gap with a park official wanting a payoff. The team left but the Jeep stayed in the jungle.

While most people would have abandoned the dream long before this, Loren Upton was not most people. He set off from Prudhoe Bay in June 1984 driving a 1966 Jeep CJ-5 called the Sand Ship Discovery. This time, he would be joined later on in the trip by his wife, Patricia. They had met in Panama on a scouting trip some years before.

Finally, Success in The Gap

By October 1984, Upton and crew had reached Panama. They left what used to be known as the Canal Zone in February 1985, headed for The Gap. This crossing, which relied heavily on locals to search for and clear a trail, took 741 days.

Not all at once, of course. The first 37 miles took 30 days, including days spent entirely hand-winching the Jeep and moving fewer than 150 feet. The 9-month rainy season pressed pause on travel, and the Jeep would be left until things dried up. The 1986 dry season ended with two snapped axle shafts, and Upton removed the axle and took it home until the next year.

In January 1987, Upton and crew returned with new axles, a new battery, and some gasoline. This year, the team would complete the crossing. And by spending two and a half days building a bridge instead of using canoes, it was considered a land crossing. The almost incomprehensible achievement earned the Uptons a spot in the 1992 Guinness Book of Records.

By that August, the Uptons had made it to the tip of South America in Tierra del Fuego. It was time to ship the Jeep to Cape Town, South Africa, to start the trip back north.

In March 1988, Upton left South Africa and headed north through Botswana, Zambia, and Zaire. Where most tip-to-tip drives head north to Morocco and a ferry to Spain, Loren Upton headed to Egypt — to complete the trip by land.

Then, 1,800 miles of soft sand and brutal heat in Sudan slowed the expedition to a crawl. Vehicle problems and malaria made things even worse. After Patricia was released from the hospital in Khartoum, the Sand Ship Discovery was off once again.

Until the Jeep, massively overloaded with supplies, broke an axle 90 miles into the desert from the last village. Fortunately, the breakdown was just a mile from the Nile, though it was hidden behind the hills.

For rescue, Upton built his own boat, using one of the Discovery’s kitchen drawers, some jerry cans, and silicon sealant. They floated down the Nile for two and a half days to reach a village. After a train ride to Khartoum, new axles were ordered and shipped to the U.S. embassy in the country.

The repair took 15 minutes, but flooding meant that UN intervention and assistance from the Belgian Air Force were required to reunite Patricia and Loren. The ordeal took 70 days.

To make sure the trip stayed on land, the expedition had to drive through the Middle East. In October 1988, this was politically tricky. There were two routes by land. The two couldn’t drive from Israel into Jordan, and the second through Lebanon was not an option.

The Uptons drove to within a mile of the Jordanian Border before being turned around. It was that mile that would prove to be the toughest to complete.

Getting around the border meant a backtrack and a ferry into Jordan. The roundabout route let them drive back to nearly the same place where they had turned around on the other side.

The trip then continued until reaching the Soviet Union. A paperwork problem meant their documents were not ready in Bucharest as expected, and by that point in the year all camping facilities were closed for the winter.

Instead, the Uptons headed for England, with Loren staying with the Sand Ship Discovery there until the spring of 1989. With some new corporate sponsorship and new camping gear and Jeep parts, the expedition returned to the East German border and into the Soviet Union. This time all of the paperwork was ready.

Crossing the border north into Finland, the Uptons arrived in their final country, Norway. The destination was a road to the Sletness Lighthouse just outside of Gamvik.

The journey, taking one American vehicle around the world the long way, officially ended on July 4, 1989. After more than 5 years and 56,000 miles of driving, the trip was complete. Except for that one missing mile.

Another Attempt at Completion

The final mile would wait until 2018. We covered that trip in detail, so read that if you want the long version of the story — you do — and we’ll give you the condensed version now.

In 2018, the Uptons were ready to complete the last mile. The Sand Ship Discovery had been sitting at their home in Idaho and was far from ready to go. It needed repair and overseas shipping. Loren’s health issues meant that Patricia did much of the prep work driving, and the Jeep was flat-bedded to the last mile of road. The story is documented on a Facebook page created by the Uptons.

On May 3, 2018, Loren and Patricia Upton finished their all-land circumnavigation of the globe, with the Sand Ship Discovery running under its own power. In June the next year, Loren was diagnosed with dementia with Lewy bodies. After a long struggle with the disease, Upton passed away on August 9, 2022.

Remembered as an adventurer, teacher, and motivator, Loren Upton’s mantra was, “If it doesn’t work, dammit, make it work!” Upton dedicated more than 40 years to finishing a dream, taking no shortcuts. For that, we applaud him.

Sand Ship Discovery was an epic around-the-world drive in the early 1980s. But after a political upheaval forced the drivers to skip 1 mile of the trip, the original duo returned this year to complete the ‘final mile.’ Read more…
This article was originally published by Gearjunkie.com. Read the original article here.
Share on Facebook
Share on Twitter
Share on Pinterest
Share on LinkedIn