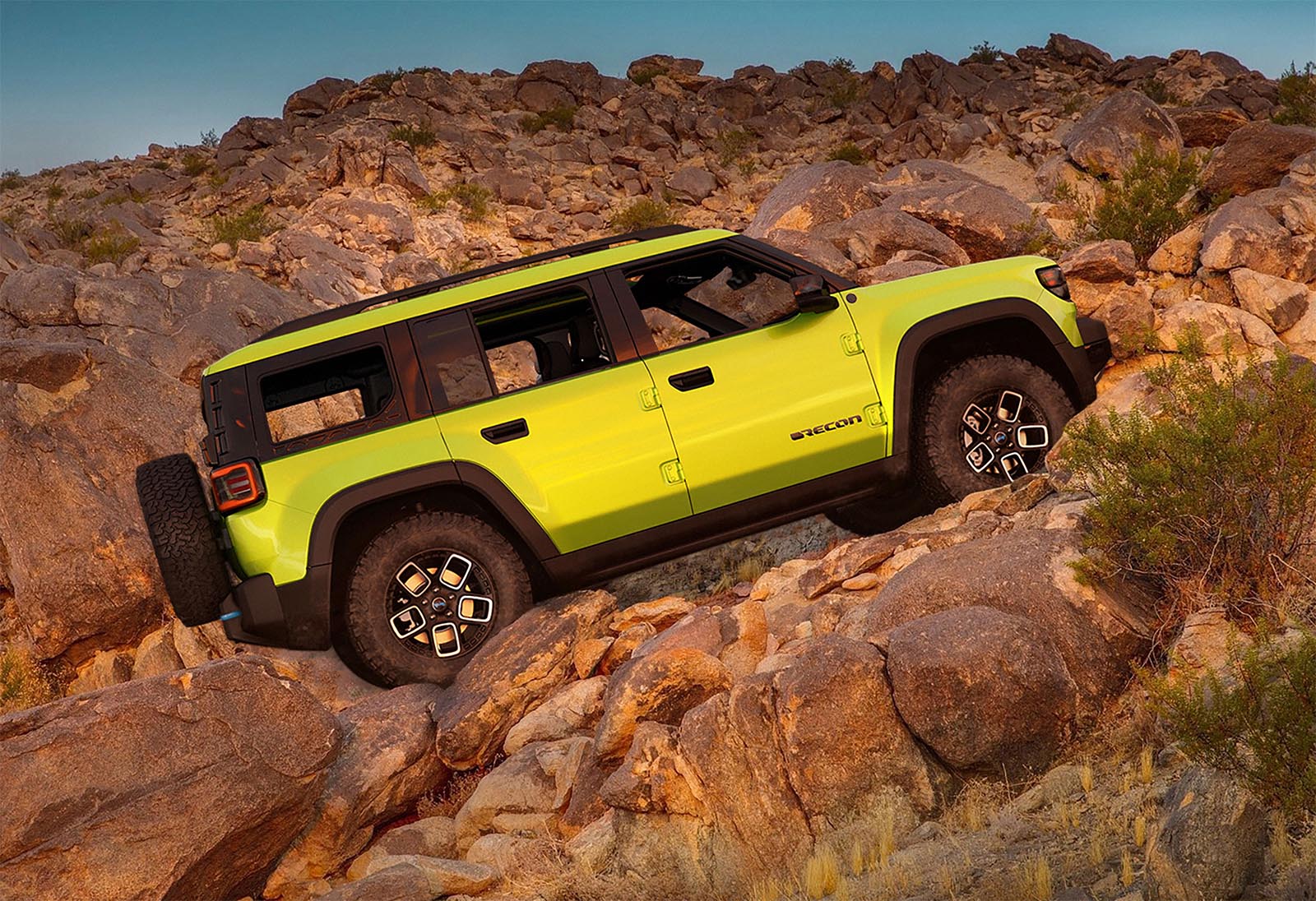 Can you deliver the ultimate in off-road vehicles while shifting from gas to electric power? Jeep thinks so. The SUV brand has already scored with its first two plug-in hybrids and now plans to take the next big step with the launch of four all-electric models by 2024.

Jeep is the latest to plug into the shift to electric drivetrain technology. The automaker has already scored a pair of hits with its plug-in hybrid Wrangler 4xe and the newer Grand Cherokee 4xe models. It now hopes to press even further with the launch of four all-electric SUVs by 2024.

The automaker pulled the wraps off three of the new battery-electric vehicles (BEVs) during a series of media background sessions on Wednesday and broadly hinted where it plans to go longer-term. By 2030, said Jeep’s global CEO Christian Meunier, the goal is to have BEVs like the upcoming Wagoneer S, Recon, and Avenger account for 100% of European sales and 50% in the U.S. — with plug-in hybrids accounting for an additional chunk of American demand.

“Our goal is very clear,” declared Meunier, “to become the global leader in SUV electrification.”

While Jeep officials held back details on one of the four upcoming BEV models, they offered substantial insight into the other three.

Both the Jeep Wagoneer S and Recon models will share the new STLA Large architecture, a skateboard-style platform that is expected to underpin some other heavy-duty Stellantis models, including the all-electric version of the Ram 1500 pickup also due out in 2024.

The Wagoneer S will serve as Jeep’s all-electric flagship, picking up on the general design cues of the gas-powered Wagoneer and Grand Wagoneer models. But it will actually be a bit smaller — with a footprint closer to that of today’s midsize Grand Cherokee.

Passengers likely won’t even notice. By moving both battery pack and key drivetrain components under the load floor, space normally required for an internal combustion engine, interior space is freed up. Shortening the traditional engine compartment will translate into substantial passenger and cargo space.

Doing Away With Drag

A closer look at the Wagoneer S reveals the extensive steps the product development team has taken to minimize wind drag. There’s Jeep’s familiar seven-slat nose, of course, but the grille is sealed, as there’s no need to pipe cooling air under the hood.

Improved aerodynamics will pay off in a big way, promised Stellantis design chief Ralph Gilles. The Jeep Wagoneer S is expected to deliver about 400 miles per charge.

At the same time, the big Jeep BEV will deliver plenty of grunt, with Wagoneer S expected to make as much as 600 horsepower — enough to launch from 0 to 60 in about 3.5 seconds.

Jeep officials also hinted at plans to add new electrified options to the current Wagoneer lineup. One model, they boasted, should get a combined 500 miles of range. They declined to reveal what type of powertrain it will use, but that version is believed to be a new plug-in hybrid.

While the Wagoneer S will offer a mix of luxury and functionality, the new Jeep Recon targets those looking for even more serious off-road capabilities.

While Meunier declared that “Wrangler is best of the best and (the) most capable” Jeep out there, it’s likely to get some serious competition, suggested Jeep’s North American brand boss Jim Morrison.

“Electrification will take us to the next level of 4×4 capabilities,” Morrison said, noting that by eliminating some traditional underbody gear, such as the oil pan, Recon — and other BEVs to come — could actually deliver better approach, breakover, and departure angles.

That said, Jeep decided not to risk alienating Wrangler traditionalists — something Ford did when it named its new electric SUV the Mustang Mach-E.

But it takes just one look to recognize that Recon doesn’t stray far from the Wrangler mold, down to its removable doors and roof. It will feature extensive underbody protection — much like the current Wrangler 4xe, tow hooks, and off-road tires.

While Jeep officials didn’t offer much detail about Recon’s drivetrain, they did note that it will get e-locker axle technology and an electrified take on the brand’s traditional Selec-Terrain traction management system.

“The all-new, all-electric Jeep Recon has the capability to cross the mighty Rubicon Trail, one of the most challenging off-road trails in the U.S. and reach the end of the trail with enough range to drive back to town and recharge,” said Meunier.

Just like the Wrangler, Jeep plans to make the Recon extremely “customizable,” stressed Morrison, adding that the automaker will have an extensive array of aftermarket parts available when the BEV goes on sale.

While potential buyers will have to wait until 2024 for the Wagoneer S and Recon, Jeep fans could snap up the brand’s first all-electric model next year — if they’re in Europe, Japan, or South Korea, that is.

Set to reach showrooms in “early 2023,” Jeep Avenger will be a downsized off-roader. We actually got a look at the then-unnamed compact SUV during the “Stellantis Dare Forward” event earlier this year that outlined the parent company’s broad shift to electric propulsion.

The compact model will slot in underneath Jeep’s current entry model, the Renegade, and will deliver an estimated 400 km, or 250 miles, range per charge.

No US Plans for Avenger

Where Recon and Wagoneer S will be assembled in North America, making them potentially eligible for up to $7,500 in incentives under the new Inflation Reduction Act, Avenger will be built at a plant in Poland.

At least for now, there are no plans to bring the small BEV model to the U.S., explained Morrison, because “that segment doesn’t exist” in the States.

We’ll get a closer look at the Jeep Avenger when it debuts at the Paris Motor Show on October 17. The automaker will begin taking orders the same day, with the first of the compact models to arrive in overseas showrooms by early next year.

As for the Recon and Wagoneer S models, Jeep officials haven’t said where they plan to formally unveil the two BEVs, but the brand will begin taking orders early next year. They’ll both be sold through Jeep dealers around the world. Production is set to begin in 2024.

We finally got a chance to get behind the wheel of the first-ever Jeep with electric propulsion, the 2021 Jeep Wrangler 4Xe. While it comes in three flavors (Sahara, Rubicon, and High Altitude), we got to experience the off-road-focused Rubicon model. Read more…
This article was originally published by Gearjunkie.com. Read the original article here.
Share on Facebook
Share on Twitter
Share on Pinterest
Share on LinkedIn

‘We Are The Rider,’ Cannondale’s Design Team Says — And Proves It
Fall Foliage Photo Tips
You Can Cook Right Inside the Latest GRAYL Water Filter
Photo Of The Day By Derek Peckenpaugh
Gear Bargains: Save on Tents, Hammocks, Camping Tables, and More