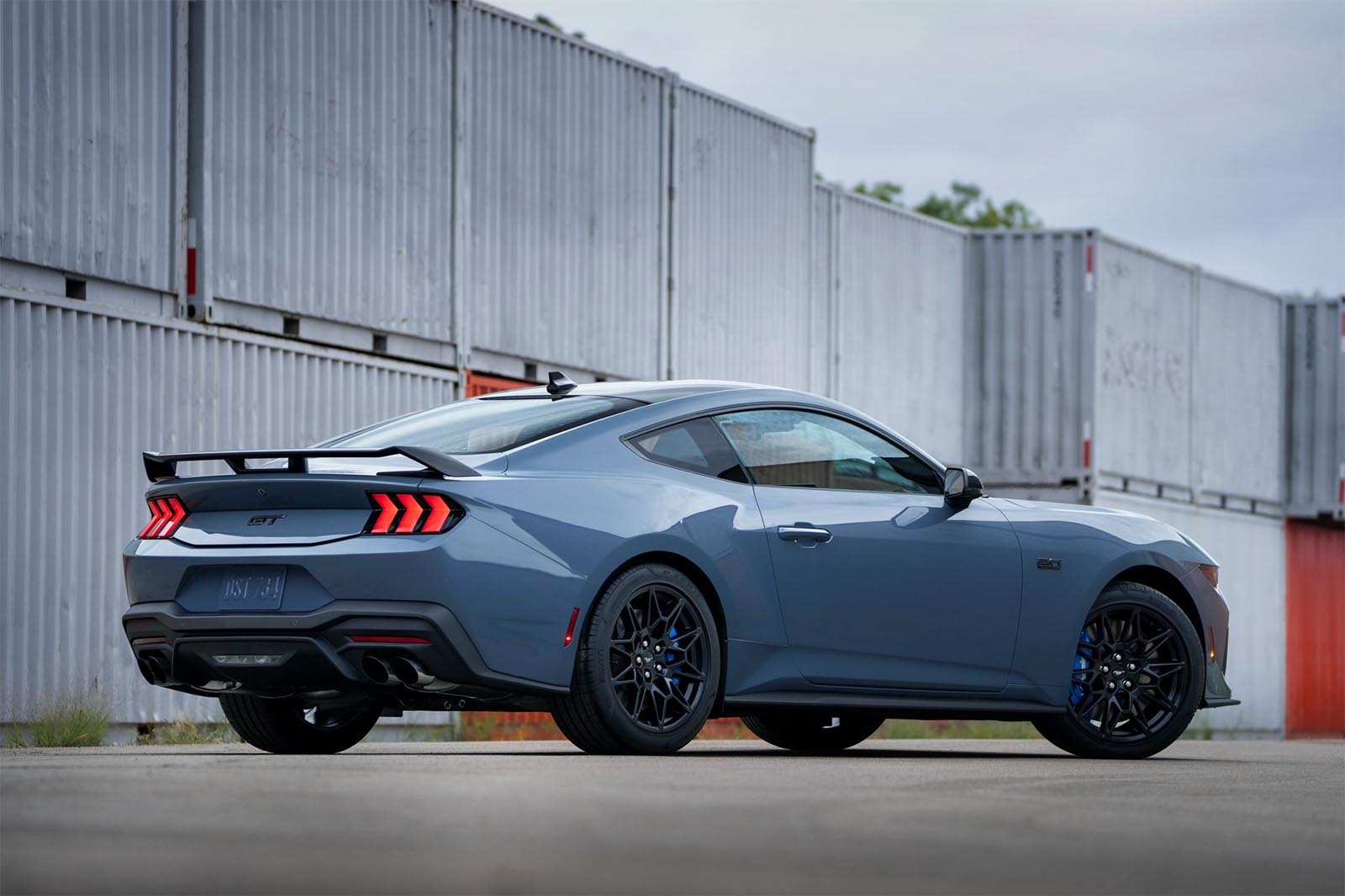 The 2024 Ford Mustang carries over its muscle car and sports car roots while being thoroughly brought into the modern digital age.

A stampede swept through Detroit Wednesday evening. A Mustang stampede, to be more precise. To help celebrate the debut of the seventh-generation pony car, Ford Motor Co. invited owners from all over the country to gather at corporate headquarters in the suburb of Dearborn and then gallop downtown for the official unveiling of the 2024 Mustang.

GearJunkie has a closer look at what they discovered.

It all began 60 years ago with a blue sheet of paper. Signed by one-time Ford Motor Co. President Lee Iacocca, it was the formal order to begin the development of a new sports coupe that would target the upcoming flood of Baby Boom car buyers.

“Iacocca knew there was a new generation coming up and he recognized the youth segment would want something different and sportier” than the staid sedans and wagons that then dominated the American roads, says Ted Ryan, Ford’s archive manager, as he displays the letter sent from Iacocca’s office on December 5, 1962.

There was plenty of internal debate over the plan, even when it came to what the new sports coupe should be called. Some favored “bird” names, and others liked “Cougar,” a nameplate that Ford’s mid-range Mercury brand would eventually adopt.

The eventual winner: Mustang. And though it was originally intended to reference the legendary World War II fighter plane, it was a good pairing with the other breakthrough product Ford was working on: the Bronco SUV.

Even as the new coupe was getting readied for market, there were plenty of skeptics and they expected Ford would struggle to just sell 75,000 of the coupes a year. But when the ’64½ Mustang made its debut at the New York World’s Fair, it became an instant sensation. Buyers snapped up every one Ford could build, about 475,000 that first year.

In the 6 decades since, the Ford Mustang has had its ups and downs. There have been great versions and some forgettable ones. But it continues to defy the ongoing shift to SUVs, CUVs, and pickups.

Indeed, Mustang is the only passenger car model that Ford still produces in the U.S. And it has been the bestselling sports coupe in the world for the past 7 years — with reason to expect it will stretch that to 8 years by the time the all-new 2024 Mustang comes to market in 2023.

There’s been plenty of speculation about what the new pony car might look like. And even those inside Ford weren’t quite sure until the last possible moment as to which of dozens of potential designs might wind up going into production.

By late February 2020, just 3 weeks before the final version had to be locked down to meet the production schedule. “We weren’t hitting the mark,” recalls Chris Walter, the exterior design chief. And the situation became all the more problematic as COVID hit and most Ford employees were sent to work from home.

Somehow, by March 16, the design team found the look they loved. And pony car fans gathering outside Detroit’s Huntington Place convention center are getting their first look at it.

In industry parlance, the new car is “evolutionary,” rather than “revolutionary.” It picks up on many of the basic styling cues that date back to the original Mustang first approved by Lee Iacocca 6 decades ago.

There’s the menacing grille with its familiar pony logo, the long hood broadly hinting of Mustang’s muscle, and the sweeping roofline that gives the sports coupe a sense of motion even while standing still.

The 2024 Mustang gets a more aggressive “brow” up front, giving it an impatient scowl. The triple-LED headlamps now wrap into the front quarter panels. The back haunches are flared out nearly an inch, both adding to the sense of restless motion.

There are unique front fascias, depending upon whether you’re looking at the base car or the GT — the latter model also getting functional hood extractors and big Brembo brake calipers barely concealed behind new wheel designs. The base car, meanwhile, has twin exhausts, with four pipes distinguishing the GT.

Ford PR folks are well-known for the mantra, “We don’t talk about future products,” and that extends to the other Mustang variants that everyone knows will follow: the likely Bullitt and Shelby editions among them.

For now, we’ll have to stick with discussing the entry model and the classic Mustang GT. The former gets 300+ horsepower, redefining the concept of a “base” car. Both models get significant engine upgrades. And what else really matters more? “Mustang’s heart is in the motor,” says Vehicle Engineering Manager Eddie Khan.

We can’t offer much in the way of details yet. For now, Ford simply says the base model will have a fourth-generation 2.3L EcoBoost. In the current, gen-6 Mustang, the turbocharged I-4 makes 310 horsepower and 350 pound-feet of torque. It has an estimated launch of 5.1 seconds from 0 to 60 mph. It’s a reasonable bet the numbers all will improve in the 2024 ‘Stang.

The same is likely for the 2024 GT, with a fourth-generation Coyote V8. Currently, the 5.0L package makes up to 450 horsepower here, and 410 pound-feet of torque. The factory estimates you’ll hit 60 in 4.2 seconds.

The GT also adds a hot new Drift Mode feature developed in cooperation with Vaughn Gittin Jr. All you have to do is hit the “drift button” on the center console and yank on the adjacent hand brake.

That’s one of an assortment of new high-tech features coming to the 2024 Mustang, and it reflects the changes in today’s market. Where raw muscle was the stuff that turned on Baby Boomers, today’s Mustang buyers want a mix of performance and technology, contends Alicia Agius, Ford’s Innovation & Strategy manager.

“We knew we wanted to connect with existing customers,” she explains. “But we also wanted to draw from a new generation of customers,” much as Ford has done with each Mustang makeover.

You get a sense of how things have changed once you finally slip inside the new pony car. Here’s where designers pushed for a more revolutionary look, among other things, doing away with the double-brow instrument panel.

This “disruptive interior,” says design chief Ricardo Garcia, “was inspired by the interior of a fighter jet.”

Among other things, the instrument panel is dominated by digital displays. In the base model, there are split screens that include a reconfigurable gauge cluster and a 13.2-inch infotainment screen. The GT gets a single, angled display blending the gauge and infotainment screens.

The instrument clusters are completely reconfigurable, with a variety of different layouts available. This includes a minimalist Calm and the appropriately named Track modes.

If the new, high-tech layout is controversial in any way, it’s likely to be the decision to remove all but a handful of traditional knobs and switches. Though Ford developers wisely retained a classic volume dial.

“We knew what customers wanted and designed the most digital Mustang ever while retaining the all-important driver-focused cockpit,” said Garcia. “Removing some of these physical buttons, such as radio and climate control, and integrating them into a digital display was popular in research with Millennials, Gen-Z, and traditional Mustang drivers alike.”

The new car features the latest version of Ford’s Sync4 infotainment system. And it adds smartphone-style over-the-air technology that will allow it to remotely update virtually every bit of onboard software. The new Mustang also integrates Amazon’s Alexa voice assistant. That will let you operate Alexa-enable devices, such as home lighting.

Another new feature is the smartphone-as-key. This feature allows you to use an app, rather than a keyfob to access and operate the coupe.

On a more classic note, Ford has upgraded the overall look and feel of the Mustang’s driver-centric cabin. It gets more upscale materials finished in techie graining. The seats promise to be more comfortable and supportive. And there’s now a sportier flat-bottomed steering wheel in all versions.

While the market for sedans, coupes, hatchbacks, and sports cars continues to shrink, Ford is confident the 2024 Mustang will continue to retain a loyal following while attracting at least some new buyers.

Look for the 2024 Ford Mustang to go into production in the spring of 2023, with sales to begin summer of 2023 in the U.S. The automaker hasn’t announced plans for overseas markets just yet.

Ford is also going to wait until closer to the on-sale date to announce pricing. The current starting price for the 2022 Ford Mustang is $27,470 plus delivery fees. The Mustang GT starts at around $37,000.