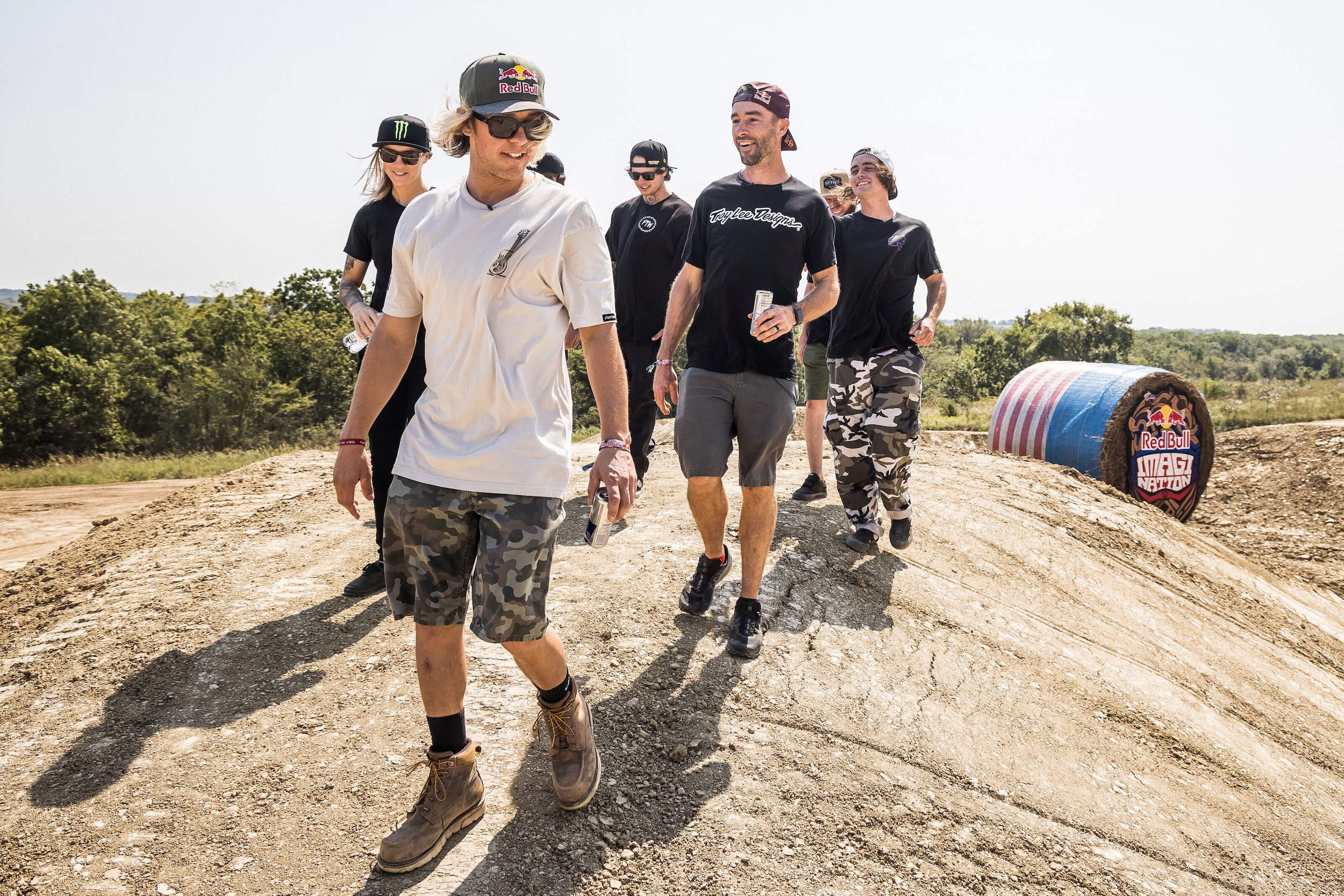 Yesterday, Tyler Bereman launched — and landed — a 184-foot jump. Tomorrow, he’ll gear up to do it again in front of an entire town in the Midwest, where he designed the massive 12-acre Red Bull Imagination course and helped cultivate the surrounding community.

A piece of reimagined ranch land outside sleepy Fort Scott, Kan., is about to get very, very loud. That’s where Red Bull Imagination goes off on Sept. 17, with a freeride moto competition unequaled anywhere.

No, I mean it: the course showcases “125 jumps minimum,” according to its designer. And the biggest, baddest one is so gnarly almost no one in the lineup tried it during 4 days of practice.

But lifelong moto athlete Tyler Bereman, who drew the audacious dirt playground, had other ideas. Twelve weeks ago, he landed on the couch with a compound fracture of his right forearm. His doctor said it’d be 12 weeks before he could get back on the bike. As that recovery period drew to a close throughout the last week, visions of airtime started to visit Bereman.

“The last four nights laying in bed, I was meditating and breathing — trying to do anything to shut my brain off. But instead, I just lay there for hours thinking about jumps. And this one jump, in particular, that had been almost haunting me,” he said.

Even if you were his doctor, I’d think you’d have to forgive him for hucking a 165-foot jump (and overjumping it by 19 feet) and gaining an estimated seven stories of air on his first authorized day back riding.

It’s not just that Bereman’s that good — the Imagination course and the community he helped build around it mean that much to him.

“The first time I came out here, I went up this 40-foot tower in the middle of the field,” he said. “And I just started drawing on a blank piece of grid paper for three hours. And then Jason Baker and the Dream Traxx team made it a reality. Since then, every person involved in this project has been amazing.

“I’ve been all over the world, and something about this place, this ranch, is my favorite place,” he said.

Let’s back up. Red Bull Imagination started as precisely that: imaginative. Back in 2014, a few of Bereman’s friends started Fest Series; a mountain bike freeride “counter-culture jam.” Bereman joined them and noticed a discrepancy — there was no creative equivalent in his sport. And the format made an impression on him.

“[I realized] the vibe that they created, together, for the riders,” he said. “They’d invite athletes from different parts of the world, build a course and invite ten more friends. And it was all focused on creating content and riding a really cool line. For such a long time, motorcycle competition was just racing or freestyle — there was no freeride. So that what’s sparked the idea.”

Immediately, Bereman became a Fest Series regular. He joined the tour in Oregon, California, Norway, and Spain. While there, he had some opportunities to hit the same jumps on his dirt bike that his friends rode on their mountain bikes.

Soon, he found himself brainstorming his own event with Baker from Dream Traxx.

Building a Course, and a Community

Baker knew that a professional contact of his, former Major League Baseball slugger Adam LaRoche, owned a ranch that could become fertile ground for Bereman’s idea to grow.

LaRoche and his family already used the property as the hub for the E3 Ranch Foundation, which hosts combat veterans as they rehabilitate and connect. That and the organization’s other goals of fighting human trafficking and rendering humanitarian aid worldwide seemed to indicate LaRoche’s altruistic streak. And he was clearly welcoming to moto riders: his ranch had served as the site for Ryan Dungey’s retirement video.

In short, all of Baker’s hunches were correct. And Bereman has since fallen in love with the property.

So have Fort Scott locals, it would appear. Bereman said this year’s event would be jam-packed, with ticket sales nearing the 1,500-visitor limit and word spreading fast in town. On a deeper level, though, Bereman sees Imagination radiating a positive effect in the rural community, where motorsports already have a foothold.

“There are people who ride motorcycles and quads around here because there are a lot of dirt roads, ranches, and farmland. But there aren’t a lot of motocross tracks anywhere nearby, and what we created doesn’t exist anywhere else,” he explained. “The whole reason I do what I do is to inspire kids to ride motorcycles.”

That trait runs as deep as Bereman’s blood. The 31-year-old California native grew up in motorcycle culture as a third-generation rider and second-generation professional. “It’s all I’ve ever known. As a family culture sport, moto brings people really close together,” he said.

That’s translated to Kansas for him, too, where he now feels the LaRoches are “new family members.”

“They’re one of a kind,” he said. “Their whole goal in life is just to serve others humbly. And that’s what they’re doing; they don’t have to do this; they’re just doing it out of the good of their heart.”

World-class riders like Colby Raha and Josh Hill will hit the dirt alongside Bereman tomorrow, Sept. 17, starting at noon. They’ll tear it up until roughly 7 p.m. And maybe one of them will summon the psych to gun it over the big jump, which experts and judges who saw Bereman do it described with colorful superlatives.

If you’re in the area, the course, the riders, and the atmosphere add up to a can’t-miss. It’s hard to picture witnessing any combination of higher talent and bigger air at the ticket price of $65 for adults and $30 for kids.

Be advised — you’ll want to check out Red Bull’s recommendations for fans: you’ll ride a shuttle several miles from the parking area to the course, so some preparation is advisable. (Yes, there are concession stands and bathrooms.)

But if you do make it out to Fort Scott, we’d say eat your Wheaties first — you’re going to be picking your jaw off the ground a lot.