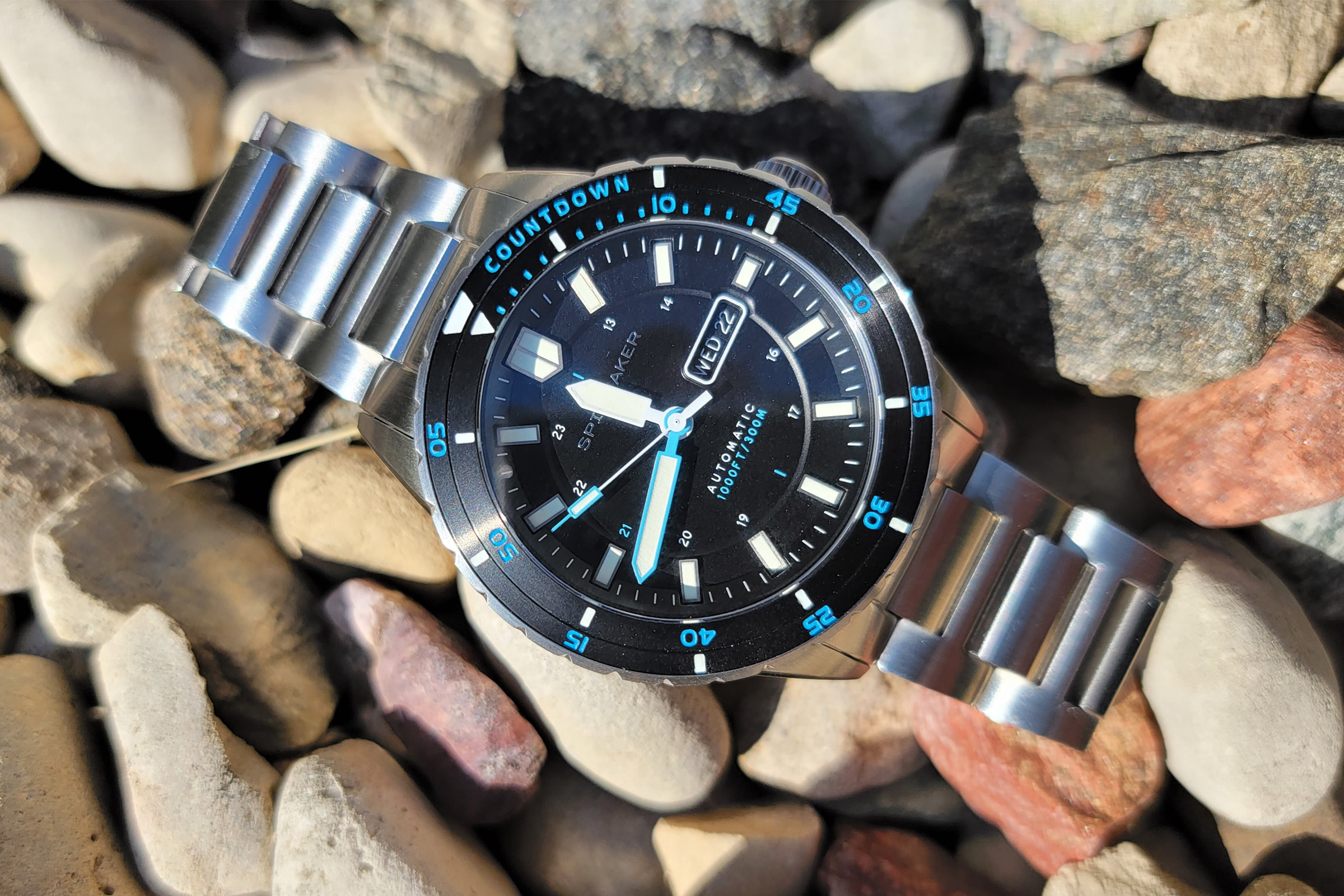 Spinnaker’s burly dive watch may not be perfect, but it’s surprisingly as much beauty as beast.

Spinnaker has something of a complicated legacy among watch enthusiasts. For a long time, it was seen mainly as an “homage” brand, a company that took iconic designs, changed a thing or two, and slapped a basic mechanism beneath the logo.

But with newer releases like the Spinnaker Hass Dive Watch, it feels as though the company is coming into its own. In the brand’s words, this model, along with the recent Piccard, is “inspired by and designed for the brave and adventurous who traverse, discover, and live among the waves of the open sea.”

The Hass bears all the hallmarks of a legitimate dive watch. Its 300 m of water resistance is better than what you’d find on most timepieces in this price range, swimming boldly into luxury watch territory.

And while it’s true that I’m not exactly next door to the ocean, there are plenty of rivers here in the Midwest, and some of our lakes are pretty great. To that end, Spinnaker agreed to send a Hass over for testing. Here’s how it fared through a busy week of testing.

In short: With the release of the Hass, Spinnaker has a new signature diver on its hands. The gorgeous dial, excellent color options, and substantial feel overcome the shortcomings of its basic (but proven) movement and a few rough edges on the bracelet.

The Hass arrived on my wrist like a ticking brick. It’s not just a can of tuna, it’s practically the whole damn fish. Even with three of its metal links removed, the watch weighs in at 6.24 ounces (178 g). I’m being a little dramatic here, as it rides quite comfortably once fitted to your arm. That process, however, is something we’ll come back to later.

I was immediately struck by the color choices of the Hass. My Pebble Black tester is particularly attractive, with a gorgeous mix of black, white, and two shades of blue.

There are nine other variants currently listed on Spinnaker’s website, all of which are rather eye-catching. Some models also ship with a NATO strap, in addition to their stainless-steel bands.

Everything about this watch is big. With a diameter of 43 mm, a lug-to-lug measurement of 50.5 mm, and a case height of 15.3 mm, it might just as well be called the “Spinnaker Hoss.” The indices are thick and well-lumed, and the wide, swordlike hands are enough to make Cloud Strife jealous.

But there are some great small touches, as well. The tiny three o’clock cutout for the date window is well done, and the lettering throughout the dial is crisp and tasteful. The rectangular tip of the second-hand matches perfectly with the hour markers, and the multilevel face is particularly attractive.

The 300m water resistance of the Hass Dive deserves a repeated highlight. That’s a professional-level rating, making this a more or less waterproof option for daily wear. With its countdown bezel, screw-down crown, and supreme legibility, the Hass is a dive watch in every sense of the term.

Let’s get to some of the issues, starting with the pinned links on the bracelet. If you want to make an adjustment by adding and removing links, you’ll either need to visit a jeweler or purchase a special kit.

I’m OK with these systems on cheaper watches such as the Timex Waterbury Ocean, but for something nearing half a grand, I’d prefer to see screws instead.

While making the fit, I noticed most of the center links feature some fairly sharp edges. You’re not going to gouge yourself (and all the skin-facing surfaces have been smoothed and chamfered), but it’s clear there was some cost-cutting at play.

The lugs, too, are a bit pointed. But the bracelet itself showed little appetite for arm hair, and the overall ride is comfortable.

Then we come to the movement. The NH16 is a Seiko-derived mechanism, which lends a credibility to the piece. Over several days on my wrist, my tester lost only about 6 seconds per day.

That’s not exactly great, but it’s within the range of what I’d expect for a mid-range automatic. Unfortunately, this is technically a non-hacking movement. That means that when you pull the crown all the way out, the second hand isn’t supposed to stop. This makes precise setting a bit of a challenge, but if you fiddle with it a bit, you can get the hand to freeze.

I’ll go ahead and say it: All new watches above $150 should hack. But what about a modern classic like the Seiko SKX? It doesn’t and if you can find one, I’ll lay odds that the fit, finish, and materials probably won’t be as good as the Spinnaker.

It’s a double-edged sword for watch nerds, not unlike the hands on the Hass’s face.

After all this hemming and hawing, would I recommend the Spinnaker Hass? If your wrist is smaller than 7 inches, then no. The watch will simply be too big.

If you can’t stomach the idea of a non-hacking movement, then no. And if you absolutely cannot abide a heavy piece of steel hanging from your wrist, then no.

But I’ll be honest, I like this watch a lot. I feel it should cost about 25% less, and there are definitely a few surfaces that need another pass through the machine shop. But to paraphrase a fellow reviewer, it feels like Spinnaker is actually trying.

The effort shows in its strong execution of a solid design. The broad hands, bright lume, and beautiful color schemes of the Hass adorn a chassis that sells this timepiece as a legitimate, stouthearted tool.

And with 300 m of water resistance to back up its looks, you’ll have little to fear from the elements.