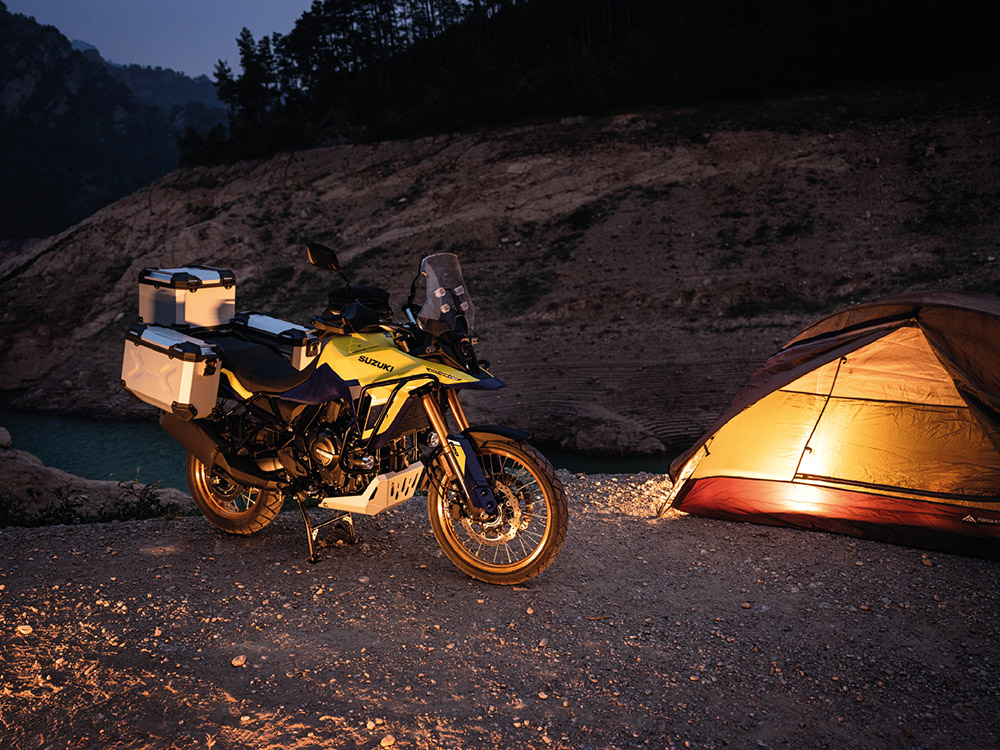 The Suzuki V-Strom lineup gets a new member of the family, which fits right between its siblings. No, the venerable V-Strom 650 isn’t going away, but we do now have a larger, more refined middleweight option in the 2023 V-Strom 850DE.

The rumor mills have been on fire spreading the news that Suzuki was working on a replacement for the V-Strom 650. There was no need to fret, however, as the 650 lives on and there is a new V-Strom in the lineup. Welcome the 2023 Suzuki V-Strom 850DE, less tractor than the 650 and more off-road-capable than the big V-Strom 1000.

The V-Strom 650 is one of Suzuki’s longest-running models. Introduced back in 2004, it has gained a loyal following worldwide and has been largely unchanged since its introduction. Renowned for its supreme versatility and stone axe reliability, many consider it the ultimate all-rounder.

We’ll have to see if the 650 can hold down that crown as the 2023 V-Strom 800DE is a compelling new all-rounder package. The new bike was just revealed at the motorcycle industry show, EICMA, in Milan. Let’s dive into what this new middleweight contender is all about.

The unexpected decision to keep the V-Strom 650 in the 2023 lineup is proof of its popularity and ongoing strong demand. But it also indicates that Suzuki perceives great potential for expanding its V-Strom range with a larger mid-weight model.

This is not surprising, as mid-weight adventure tourers are currently the fastest-growing market segment. They’re predicted to outsell their larger-capacity siblings as buyers increasingly tend to shy away from the expensive and weighty ADV behemoths.

The Suzuki V-Strom 800DE enters the fray of a hotly contested market on the same day that Honda launches its new XL750 Transalp. Both new models had better come prepared, because they face some stiff competition.

The 800DE engine is not a V-twin, contrary to what might be expected based on the V-Strom moniker. Suzuki has developed a brand-new liquid-cooled 776cc parallel-twin DOHC engine.

The crankshaft is configured for a 270-degree firing order. Spacing the power pulses, this configuration should enhance traction and delivers smooth, torquey power that’s easier to control on forest roads and trails.

Suzuki also says the spaced firing order produces an exhaust note similar to that of the 90-degree V-twin engine of the current V-Strom 1000. To comply with emissions standards, the exhaust gases pass through a dual-stage catalytic converter inside the mid-pipe of the 2-into-1 exhaust system.

The V-Strom 800DE engine introduces the innovative Suzuki Cross Balancer. This is the first time a production motorcycle is fitted with a biaxial primary balancer. This means the engine positions two balancers at 90 degrees to the crankshaft. As such, this patented balancing system should suppress vibrations while allowing for a lighter and more compact engine.

Packed With Electronics for Rider Preference

The V-Strom 800DE comes standard with the Suzuki Intelligent Ride System (SIRS). This suite of advanced electronic systems is aimed at optimizing performance characteristics in response to road conditions and rider preferences.

Thanks to the Suzuki Drive Mode Selector (SDMS), the rider has a choice of three power output modes that offer different torque characteristics and throttle response.

To assist riding in stop-and-go traffic or doing U-turns, the Low RPM Assist System prevents the engine from stalling when pulling away from a standing start or riding at low speeds.

The rider controls the S.I.R.S. suite of advanced electronics via a 5-inch TFT LCD instrument panel. The LDC screen provides access to the Drive Mode Selector and Traction Control System — including Gravel Traction Control mode. Also, Bi-Directional Quick Shift and rear ABS can be switched off for off-road riding.

The V-Strom’s steel backbone frame allows for a wide range of use. To maximize straight-line stability on unpaved roads, the chassis geometry features a long wheelbase and rake. The slim seat and narrow seat rails of the removable steel sub-frame allow easier control while standing on the footpegs.

The V-Strom 800DE is the most off-road-focused model in the V-Strom lineup. This is illustrated by the 21-inch front wheel, 8.7-inch ground clearance, and 8.7 inches of suspension travel at the front and rear.

The SHOWA inverted fork features adjustable spring preload and compression and rebound settings. The hand-operated hydraulic spring preload adjuster allows for quick setting of the shock absorber sag. This is ideal for when you’re riding with a passenger or luggage.

At the time of the global launch at the EICMA in Milan (Nov. 8, 2022), no news was available regarding the delivery schedule at U.S. dealers. As for the price, Suzuki’s Motor USA website simply states the Base MSRP is “TBA.”

All that is to say, it’s coming and probably soonish. We can’t wait to throw a leg over the V-Strom 800DE and see what Suzuki’s latest offering really has to offer, especially off-road. Stay tuned.

How to Get Into Adventure Riding Without Breaking the Bank